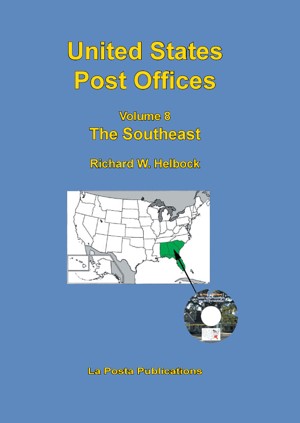 By Richard Helbock
The eighth volume in a set of eight that comprises an alphabetical listing of the over 166,000 post offices that have ever operated in the 50 United states from 1776 to date. The listing for each office contains a county location, dates of operation and a Scarcity Index (S/I) value that offers postmark collectors with a guide to the relative value of postmarks from that post office.

Richard W. “Bill” Helbock [B.S., USMA, West Point, 1960; M. A. & Ph.D (Geography), Univ. of Pittsburgh, 1973] has been an enthusiastic postal historial since the 1950s. He founded La Posta: A Journal of American Postal History in 1969, and has continued to publish it bimonthly for the past 40 years. In addition to La Posta, he served as editor of The Alaskan Philatelist and the Military Postal History Society Bulletin. Helbock has authored over twenty postal history books and monographs, and served as editor of the American Philatelic Congress Book from 1999-2005. In 1991 he was granted the Distinguished Philatelists Award by the U.S. Philatelic Classics Society, and the Northwest Federation of Stamp Clubs selected him as Distinguished Philatelist in 2003. Bill and his wife Cath currently reside on a rural property near Chatsworth Island, Australia.

You have subscribed to alerts for Richard Helbock.

You have been added to Richard Helbock's favorite list.

You can also sign-up to receive email notifications whenever Richard Helbock releases a new book.