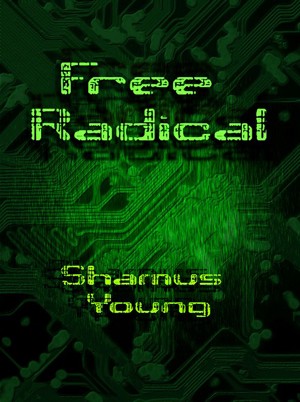 Shamus Young is a programmer specializing in old-school graphics techniques. He's the author of the blog Twenty Sided. He's the creator of the webcomics DM of the Rings and Stolen Pixels. He's one of the hosts of the videogame commentary series Spoiler Warning. He's tired of writing about himself in the third person.

I really enjoyed this book. As others have said, then ending is great. The action scenes are lively, and dialogue believable, as are the characters.

The book is intelligently written, and flows very well. In fact, for the most part, it was a very pleasurable read. I think it would make a great movie.

I bumped a star off for not fixing many of the grammer/typographical or spelling issues. It was obviously spell-checked but missed alternate spellings for words that sound the same but have different meaning. Some of the prose could be less vague. For example, "*Some* environmental control system had just been stripped...He screamed as *some* tool had punctured his lower abdomen...the walls seemed to vibrate with *some* inaudible..." It's usually better to be specific for more impact, and this popped up many times to the point of become a little annoying--just a little.

This book is very definitely a good read. I agree with reviewer Max Savenkov that the ending is excellent. The prose is extremely elegant.

I am completely unfamiliar with the game "System Shock", and I can confirm that this novel can definitely stand on its own. My impression (after reading the Wikipedia article on the game) is that the most original elements of the novel were invented by the author and do not come from the game. The novel has a depth that is in no way implied by the term "first-person shooter".

Incidentally, I loved the word "drones" for human wage slaves, and "factory default settings" for the uncyborged human body (I don't know whether these are standard phrases in cyberpunk novels).

(review of free book)
MRubingh reviewed on April 7, 2016
(no rating)
I take the liberty to submit a list of the typos I found (in the version downloaded 5 April 2016). All of the typos are trivial.

Words that seem misspelled (highlighted between **):
Chapter 4: The police were the only ones with guns, but clanners were *viscous* and cunning, and managed to keep the casualties nearly even. [--> viscious]
Chapter 4: As Deck entered, Nomen *look* up from his work and greeted him [--> looked]
Chapter 9: To interact on a level where thought and deed were one *in* the same. [--> and]
Chapter 11: She nodded as she took *and other* sip of coffee. [--> another]
Chapter 14: He could either *send* an exhausting and noisy half-hour shoving all of this stuff away from the door, or he could look for another way through. [--> expend]
Chapter 19: "You *guy's* aren't gonna nuke this place, are you?" [--> guys]
Chapter 20: There was a long pause while he looked *into to* poker face some more. [--> into her]
Chapter 24: Metal appendages, adorned with gruesome power *tolls* and attachments reached out to grab him and tear his flesh. [--> tools]
Chapter 26: Shodan was experiencing pain, as well as *it's* inevitable opposite, pleasure. [--> its]
Chapter 27: "Today, TriOptimum Corporation, *it's* families, and indeed the entire world suffered a terrible blow [--> its]
Chapter 27: A luggage bot lumbered by, *it's* heavy black frame loaded with assorted personal possessions sealed in durable packaging. A thrower - a bot with multi-jointed arms designed to move the luggage around - chased after it with a lone suitcase. *It's* body was carried by a pair of hefty tank treads that provided a good anchor of weight for heavy lifting tasks. [--> its, 2x]
Chapter 28: The round, dark body of a peace sentry sat nearby, *it's* red and blue lights flashing. *It's* loudspeaker proclaimed that it had detected unauthorized weapons. [--> its, 2x]

Words that seemingly should be deleted (highlighted between **):
Chapter 10: The corridor *a* was long and narrow, and ended with a door that had been jammed open.

Word(s) missing (at the position marked by **):
Chapter 8: He waited for it to come around for another swing and then nailed ** with a solid blow to the top of its chassis.
Chapter 10: She ** sharp glance to someone off screen before turning her attention back to him.
Chapter 13: "It ** not like you turn off her morality chip and she suddenly becomes evil.
Chapter 24: The news changed overnight from ** endless loop of speculation into a chaotic mess as they attempted to report on all three stories at once. [--> an endless loop, or: endless loops]

Period missing (at the position marked by **):
Chapter 6: "You may not know or think about Deckard Stevens" ** Shodan would have the memories of the night it helped him out of the TriOptimum building
Chapter 8: He was at the top of the food-chain ** He could take whatever jobs suited him, and name his price.
Chapter 9: "After over a week of paging the station we finally get a response, and it's a ten second conversation with a nut-case ** You're sure he's not some prankster, and he really is on the station?
Chapter 11: Rebecca Lansing worked for Security Solutions Incorporated, a Seattle-based firm specializing in counter-terrorism ** Her firm had been hired by TriOptimum the previous week.
Chapter 12: A sink was built into the counter top ** A small fridge was built into the wall opposite the door.
Chapter 12: "No, make it something that's not in the phone book ** Make it the slogan of some small store, or the graffiti on the wall.
Chapter 16: She had reverted to the cool, businesslike demeanor ** She was choosing her words carefully
Chapter 19: In a moment he would be surrounded with Shodan's genetic freak show ** He padded his sleeve
Chapter 21: such as riding on the sidewalk and performing u-turns across busy two-way streets to reach an on-ramp ** [At end of paragraph]
Chapter 21: A horn mixed with a wailing string of curses as he released the tension and accelerated through the tight arc onto the on-ramp ** The kinetic store was unleashing all of the effort it had been able to capture
Chapter 21: and there were no likely targets in that area for a data feed ** All he could see were rows of sad, short, worn old buildings

Other typos in interpunction:
Chapter 4: As Deck entered, Nomen look up from his work and greeted him, " "Deck, son. Welcome." [One double-quote character too many]
Chapter 14: Without the inhibitor, she will constantly pursue all of these goals. [Double-quote missing at beginning of paragraph]

page turner, in the tradition of neuromancer and turing evolved.
Enough IT to make it credible, not too much to make it boring, well written.

When I tried to play System Shock, I didn't like it at all. It was too dark, monsters were too horrible etc. I hate horror movies and games, and System Shock had too much of that genre.

So, I stayed away from Mr. Young's novel-sized fan-fic of that game for a long time. But after The Witch Watch, I just had to try it.

I liked it. No, I LOVED it. To my surprise, it is written about as professionally as the second book, and it looks much more like a labor of love. Maybe it's because Free Radical is a case of "Write what you know": Shamus is a programmer by trade, and inner workings of a sentient AI are more his thing then Victorian era adventures with magic. Or maybe it's me. Anyway, I found action in this book to be far superior to anything found in Witch Watch, with more details and more suspense. While humor is nearly lacking in here, the story still glued me to the screen of my old, beaten-up PDA.

But the biggest plus I can give, I give thins book for its ending. If you are wondering - it's not the same with the game. Also, it's not what I would expect of most authors. Some may find "happy end" forced, maybe, but I think it is just... Sweet? A bit like GLaDOS redemption in Portal 2. Maybe it's a perversion, but I have a thing for non-murderous AIs who actually like humans. There are so few of them in all works of fiction...

Anyway, give Free Radical a reading. Even if you're not video games fan. It's a VERY good book, only a little spoiled by novice mistakes, like repeating phrases (I think Shamus mentions "remains of some long-burned fire" about 4 or 5 times through the text).

(review of free book)
Paul Spooner reviewed on Jan. 19, 2012
(no rating)
A flowing narrative through through a surprisingly optimistic cyberpunk future. The grit is still there, but it's smooth grit; Grit composed of perfect tiny marbles; Spheres whispering in the mind. I've read this book twice, and the second time was just as good.

(review of free book)
Eddie Jones reviewed on Jan. 18, 2012
(no rating)
I haven't read this but I love techno thrillers. Plus it's free.

You have subscribed to alerts for Shamus Young.

You have been added to Shamus Young's favorite list.

You can also sign-up to receive email notifications whenever Shamus Young releases a new book.