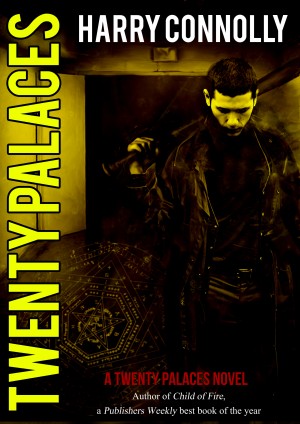 By Harry Connolly
Rated 4.00/5 based on 1 review
In this prequel to the Twenty Palaces novels, Ray Lilly encounters magic, otherworldly predators, and the Twenty Palace Society for the first time. Can he protect his oldest friend from the supernatural vigilantes of the society? And is he right to try? More
When Ray Lilly was 13 years old, a handgun accident landed his best friend, Jon Burrows, in a wheelchair and turned Ray into a runaway and petty criminal. Fifteen years later, Ray returns home after a stint in prison; he’s determined to go straight, but he knows he can’t do that without making peace with his old friend.

What Ray doesn’t expect is to discover that Jon has just received a mysterious cure–not only is he out of his wheelchair, he seems stronger and faster than… well, pretty much anyone. Worse, his cure has drawn the attention of all sorts of attention: the media are camped out on his block, the police are investigating him for insurance fraud, and weird shadowy figures have begun to draw closer, figures who clearly do not mean to do Jon any good.

This prequel novel to a trilogy was a tough read, at times. The main character, Ray, spends a good amount of time reacting rather than acting. Which is not surprising considering he's rather out of his depth having just gotten out of prison, trying to create a new life for himself, and discovering magic is real.
The only problem I had was is near constant internal dialog of victimization, his own or seeing others as victims. Not that he wants to victimize them, as he constantly says in his head, but...

Still the action was good and the magic of the story is well thought out.

You have subscribed to Smashwords Alerts new release notifications for Harry Connolly.