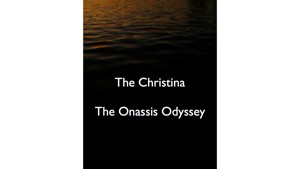 The Christina: The Onassis Odyssey

By January Jones
The Christina: The Onassis Odyssey by January Jones is a history of the magnificent ship owned by Aristotole Onassis where he conducted his business empire and wined and dined the rich and famous. The first jet setters flocked to this vessel including Winston Churchill, Maria Callas and the Kennedys. This is where Ari courted Jackie Kennedy and the setting for their marriage.
Available ebook formats: epub mobi pdf rtf lrf pdb txt html
First 20% Sample: epub mobi (Kindle) lrf more Online Reader
pdb
Price: $5.99 USD
Buy Add to Library Give as a Gift
How gifting works
Create Widget
Tags: jackie kennedy aristotle onassisonassi christina
About January Jones

ABOUT THE AUTHOR:
January Jones is the self-proclaimed Whine Tester with a “Stimulus Plan to Stop Whining” that is amazing and amusing. She is an expert Whine-ologist and a reformed whiner who lives every day in the No Whine Zone. Her book published by Beaufort Books is entitled Thou Shalt Not Whine…..The Eleventh Commandment and reached a #1 ranking at amazon.com

“What makes January such an expert on whining?”She is a golfer, a woman, a wife, a Mom with four kids and six grandkids. January was a widow at 25 years with small children so she knows a little about whining and more about winning.

Ms. Jones is the host of “Whine Time with January Jones”, a weekly internet radio show at www.voiceamerica.com. She has interviewed many celebrities such as Kim Goldman and Curtis Stone, The Take Home Chef on TLC, along with Fortune 500 businesses such as Curves and Honda. January has become a Chocolate expert interviewing Hershys and M&Ms.

Ms. Jones specializes in homemaker humor in the tradition of Erma Bombeck. She is a popular radio and national television guest appearing on The Balancing Act at Lifetime Channel and on the Family NetWork.

January has signed a contract with Norwegian Cruise Lines as a guest lecturer for 2009. Ms. Jones will be in Korea later this year promoting the launch of Thou Shalt Not Whine in Korean. In, December, she will be a celebrity host for The Country Clubs of the World’s Chile trip for Golf & Wine/Whines!

Recently, there has been a human-interest story added to January’s life in the form of reality television. She has been selected to be a contestant and play on the CBS Sports World Series of Golf with www.TiltPoker.net next May 11-13, 2009 in Las Vegas. Her husband entered them both and she got picked. Can she play golf or poker? Of course, Yes! Is she good? Absolutely, No! She is a 22 handicap and will be one of four women in a field of 125 players. January is being a good sport while using this event on reality TV as an amazing opportunity to promote her book and campaign for “chronologically challenged competitors.” There will be no whining allowed.

Reviews of The Christina: The Onassis Odyssey by January Jones

You have subscribed to alerts for January Jones.

You have been added to January Jones's favorite list.

You can also sign-up to receive email notifications whenever January Jones releases a new book.