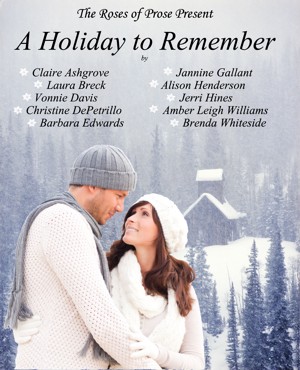 A Holiday to Remember

By Rosesof Prose
Rated 4.35/5 based on 17 reviews
Candy Wright didn't become a high-powered Manhattan business executive by letting men walk all over her. Mitch Johnson lives a simple life in rural Georgia. When the two are thrown together in a freak snowstorm, sparks fly. Will love thaw their frozen hearts, or will secrets tear them apart? One thing is certain; it will be a holiday to remember. More
She watched her mother work herself to death to give her daughter a better life and is determined to make her proud. If that means not risking her heart, not letting any man get too close, then so be it.

Mitch Johnson lives a simple life in rural Georgia. Holding his secrets close. Hiding from the life he left behind. The last thing he wants or needs is a woman to remind him of his past.

When the two are thrown together in a freak snowstorm, sparks fly. Mitch is everything she's worked to escape. Candy is a reminder of his painful past. But the attraction between them won't be denied. Will love thaw their frozen hearts, or will secrets tear them apart? One thing is certain; it will be a holiday to remember
Download: epub mobi (Kindle) pdf more Online Reader
rtf lrf pdb txt
Price: Free! USD
Add to Library
Create Widget
Tags: romance contemporary contemporary romance holiday story

I came across this story by sorting for free books under the "Most Downloads" list. This is, at the time of this writing, the number one in that category, so I figured I'd see what such a high-ranking story looks like. I also found it interesting that this was written by multiple authors, their writing styles blending together seamlessly.

First, the complaints. Although the mechanics, such as grammar and punctuation, are generally in very good order, I found the sentence structure to be somewhat odd at times—in particular, the use of incomplete sentences. However, I can let that one slide, since most of the time, it was at least done for emphasis and wasn't just a mark of sloppy writing. A slightly bigger problem for me was occasionally not knowing which speaker was saying which words; instead of using standard dialogue tags (e.g., "Candy says"), the writing style tends to prefer describing the characters' actions in the same paragraph they're speaking. While I can appreciate that the intent was to do something more creative than constantly using "he says"/"she says" and variants thereof, I would have preferred the action be integrated into the dialogue marker (e.g. "Candy replies, looking intently into his eyes"). I don't know if that's just me, but I feel like a simpler and more consistent dialogue style would have been much better. Another slight oddity with the speech was that, at times, it felt like the characters would go through extreme shifts in tone very rapidly. One second, they could sound like they hate each other, and the next second, they're flirting. This issue is a bit rarer than the previous one but still struck me as strange and made me do a double-take whenever it did happen.

In terms of the structure of the story as a whole, I quite enjoyed the plot line; it's simple enough that anyone can follow it without any trouble while not being excessively complex. The characters' backgrounds are described very well and work nicely as an integral part of the story. As for Mitch's explanation at the end for hiding his identity, it was certainly moving but perhaps not spectacular. It didn't necessarily feel like it was phoned in, and I'm not quite sure what else I would have wanted specifically, but it almost felt a little bit too quick and simple to warrant the sheer amount of difficulty he had making the confession. I'll just say that it was adequate and, without needing to ask for more than that, leave it there.

Overall, this is a wonderful story, and I would definitely recommend anyone who is reading this review give it a read if you're on the fence about whether you should check it out. Even though I may have my criticisms, the parts of the story that are done well definitely stand out and make the story worthwhile.

Well written, nothing extraordinary but worth reading.

Romantic and a sweet story.

I'm a sucker of romance, and I liked this book. It's good. Though not really something that made me fly off to the moon and back. But still, a nice story.

It's a typical heart warming romance, a bit dissappointed by the actual revelation but generally well written.

I love this book. Love the plot, love everything about it. Keep on writing!

You have subscribed to alerts for Rosesof Prose.

You can also sign-up to receive email notifications whenever Rosesof Prose releases a new book.