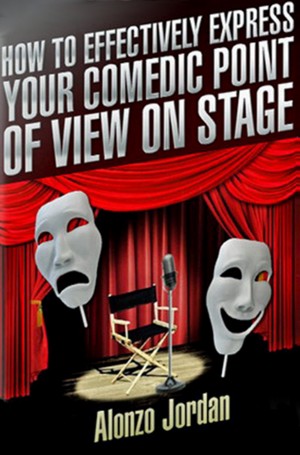 How To Effectively Express Your Comedic Point Of View On Stage

By Alonzo Jordan
Do you want to become the next hilarious stand-up comedian on the scene today? If you do this book will give you the knowledge of how to effectively express your comedic point of view on stage. It's not about original topics...just about your original point of view. You have a natural comedic voice and this book will show you how to exploit your original take on topics before a live
audience.

Alonzo Jordan is a comedian and a freelance writer of stand-up comedy. He loves writing, reading, and laughing. But most of all performing stand-up comedy in his spare time.

Since 1999, Alonzo Jordan have written, performed, and observed more than 10 years of stand-up comedy. His mission was to look and to learn from the pros, amateurs, promoters, managers, and some booking agents in the entertainment industry. He wanted to be the best known comedian in town.

He served honorably in the United States Navy for 11 years. But during his years in the service he came across many exciting events to observe and to talk about. Such as, getting along with multiple personalities and egos.

His goal was to find out what makes stand-up comedy so hilarious to some crowds and dull to others. His mission was simple and it was to find the hidden truth behind the laugh. To be hilarious was a focal point for him. He wanted to discover the true meaning of what makes comedy so funny. He wanted to break the long awaited code of how to produce and write hilarious comedy material that comes from an individual point of view. In this book you will find that he did some homework. Alonzo resides in Atlanta,Georgia.

You have subscribed to alerts for Alonzo Jordan.

You have been added to Alonzo Jordan's favorite list.

You can also sign-up to receive email notifications whenever Alonzo Jordan releases a new book.