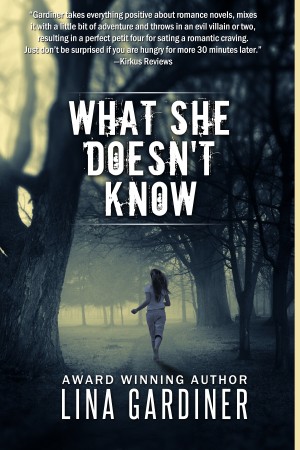 What She Doesn't Know

By Lina Gardiner
Rated 4.60/5 based on 5 reviews
Raven Gale can’t put her past behind her. Haunted by the fact that her husband tried to kill her and killed himself instead, she's driven to find out what is going on. Someone is pretending to be him on an isolated island in the Bay of Fundy. She needs to know why. But now, stranded on an island with no way back to the mainland, she’s in the worst trouble she could ever imagine.

"Gardiner takes everything positive about romance novels, mixes it with a little bit of adventure and throws in an evil villain or two, resulting in a perfect petit four for sating a romantic craving. Just don’t be surprised if you are hungry for more 30 minutes later."
--Kirkus Reviews

I acquired this ebook for free during Read An Ebook Week in March 2012. Its description suggested that it was a mystery, and I was intrigued by the setting – an island in the Bay of Fundy.

What She Doesn’t Know is actually romantic suspense. I don’t read a lot in this genre nowadays, which may have coloured my attitude somewhat.

The necessary elements of the genre are definitely present – an injured, bereaved and beautiful woman, and a strong, skilled but not altogether trustworthy guy. She (Raven) is identified as a librarian near the beginning, and he (Sloan) tells Raven that he is a university professor and an archaeological expert. But there is almost no mention of these professions afterward. Raven is affected by some form of amnesia, which may explain the paucity of details about her. Sloan’s background is somewhat more developed, but to me both characters remained flat – types rather than real people. The author handles their mutual attraction deftly and with touches of humour. That’s one of the strengths of this book.

The other necessary element, that of suspense, is furnished by a gang of bad guys and a shadowy organization called the Protectorate. The gang is trying to find a precious “artifact” whose existence has been revealed to them by Raven’s seemingly dead husband, once a member of the Protectorate. The bad guys are singularly ineffective, hovering in the background until they are needed to deliver a shot of action. More often than not, they quit the scene empty-handed, leaving the two protagonists to speculate as to what they wanted and why they didn’t kill anyone.

The plot moves along quickly, sometimes at the expense of the all-important element of suspension of disbelief. The main characters have many discussions/arguments that dance around the central secret of the plot, which cannot be revealed too early. Which is why no one ever asks some logical questions – what is the treasure/artifact supposed to be, and what exactly is the Protectorate? Eventually, the plot is resolved in a fairly satisfying fashion that hints at a sequel.

I was disappointed that the setting received fairly short shrift from the author. In my limited experience with romantic suspense, I’ve noticed that often the reader gets a mini-travelogue along with the story, but that is not the case here. The island in the Bay of Fundy could be anywhere in temperate North America.

Finally, one error occurred so many times that I am compelled to mention it: the plural possessive of “parent” is “parents’,” not “parent’s.”

I love this arthur. I first came across her books when I readed her Jess Vandermire Vampire Series. With all her books I couldnt put them down. She keeping you waiting for the next moments. You would enjoy this book. With all the emotions, Mrs. Gardiner keeps you on a rolling coaster with the dips and turns. Mrs. Gardiner in on my autobuy list.

I just love a good Romantic suspense novel and yes I loved this one. I read this book one evening because I could not put it down because it was just so good and I couldn't wait to know what happened next. If you are into romantic suspense books then I think you will most likely like this one.

I was intrigued by this novel from the beginning. Romantic suspense novels featuring a 'treasure hunt' are few and far between. Perhaps that's because there so difficult to get right. Well, Lina does get this one 'right.' Full of intrigue, secret societies and secret passageways, I found this book hard to put down. Recommended!

I’ve been a fan of Lina Gardiner’s writing for years and have been waiting for her next book. What She Doesn’t Know was well worth the wait. Once I started reading this book I didn’t want to stop. I thought I knew what was going to happen, but I didn’t come close. Gardiner built in so many plot twists I finally gave up trying to second-guess her and sat back and enjoyed the ride. We have a heroine who has amnesia, a hero who’s been in love with the heroine for years, but must lead her into a danger to discover the hidden treasure he’s pledged to find. There’s family secrets, a mystical isle in the Bay of Fundy, modern day pirates and the lure of the Knights Templar legend. But most of all Gardiner gives us a touching love story of two people falling in love for a second time. A wonderful, riveting story. Definitely a 5 star!

You have subscribed to alerts for Lina Gardiner.

You have been added to Lina Gardiner's favorite list.

You can also sign-up to receive email notifications whenever Lina Gardiner releases a new book.