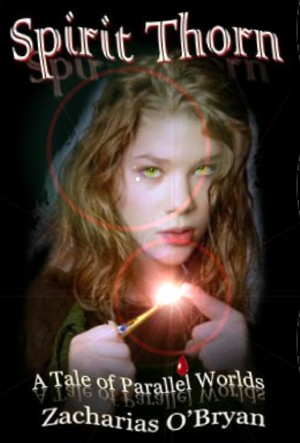 For half a century Zacharias O’Bryan has captured listeners’ imagination with his stage plays, his fireside tales and his songs of adventure. The grass-grown, tumbled-stone castles of Ireland, the dark-chambered Toltec tombs of southern Mexico, the Anasazi cliff dwellings of the American Southwest—these are lands that speak to O’Bryan. And now, rafting into a parallel universe via the roadless river canyons of Southern Oregon, you would be wise to believe his words: The greatest story of all time taps at our window. It begs us to participate.

This was great fun, a fun-loving romp. It's the kind of story adults will love to read to children, and the children will enjoy it too.

There is always a danger that novels tackling such themes can end up boring the reader with humourless piety, but Spirit Thorn does not suffer this fate. Far from it - even at its most serious moments, the twinkle in O'Bryan's eye is never far from view. The mystical and ecological concepts are never forced or preached - the reader doesn't have to be a tree-hugging ecologist to feel for the plight of Molly Greenfingers (whatever she is!) and appreciate the numerous metaphors and allegories regarding humanity's place in nature and the wider cosmos.

The story follows a teenage boy - Braden - on the cusp of adulthood. His parents have been missing for a year. His attempts to find them, and comprehend the research they were conducting into the multiverse and other dimensions, leads him to encounter Kestrelle, a being who looks and sounds like a girl of his own age, but is clearly something else. An elf? Sure, why not - but your concept of elves probably stops far short of encompassing what she and her kin are.

Spirit Thorn pulls the reader down the rabbit hole and gives glimpses of what might lie behind the thin membrane of our reality that is the perceived uni-verse, but wisely does not attempt to provide too many explanations. Like all great works of science fiction and fantasy, there are enough broad strokes to allow the imaginative reader to paint in their own details and ponder their own questions.

Excellent for young adults of all ages -- parallel worlds adventure may even engender some thoughts to ponder along the way.

This book combined elements of nature and science to bring together a epic fantasy that drew me in from the first page.It sent my mind reeling about possibilities of other worlds. It made me think about our own reality. All these realities each moving in time with one another. Any book that can draw me in from the first page and make me keep reading is a 5 star book to me. His world weave is very descriptive and I can almost feel his world in my fingertips. Bravo..looking forward to more reads.
If you like a book that makes you think, this is the one for you:)

Many books describe odysseys, but few actually bring the reader along as skillfully as this with themes that are so pervasive and consistently defined. Art and science blend and twirl like graceful dance partners. They aren't detached and uninvolved but part of a larger whole. And as the harmonies between science and art are explored, so are the harmonies between space and time, man and earth, life and death, peace and violence, piercing and healing. . . The reader has an ever-present mental image of paired sub-atomic particles - spinning and oscillating, but always linked.

(review of free book)
Diane Schaffer reviewed on May 9, 2010

Review of Spirit Thorn, a Tale of Parallel Worlds:

Give Zacharias O’Bryan five stars for this novel. One for a rollicking good adventure, one for ethics, another for humor, another for simplifying some mind-bending science, and one more for his two flawed but deeply good protagonists who learn the meaning of loyalty and sacrifice.
Having grown up on The Wind in the Willows by Kenneth Graham, the Narnia stories by C.S. Lewis, and The Hobbit by J.R.R. Tolkien, I have high standards for family read-aloud stories.
I decided to give Spirit Thorn a try. By the time I had browsed the nine free chapters, there was no stopping me. The final ten chapters, once in hand, held me fixed.
My husband and I no longer have young children with whom to share stories, but we’re lucky enough to have three bright grandkids—meaning I look forward to reading Spirit Thorn at least three more times.

You have subscribed to alerts for Zacharias O&#039;Bryan.

You have been added to Zacharias O&#039;Bryan's favorite list.

You can also sign-up to receive email notifications whenever Zacharias O&#039;Bryan releases a new book.