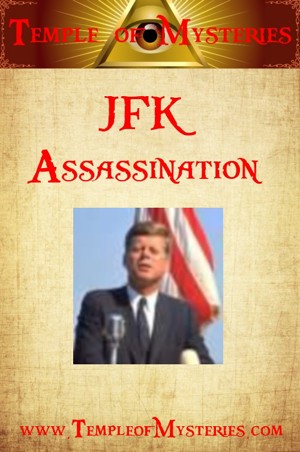 This eBook examines the main theories from both these genres. It also examines the circumstances that prove the president’s assassination was a conspiracy – the work of more than one hand. Crucial to proving this is the evidence from a piece of film only 26 seconds in duration – the legendary footage shot by Abraham Zapruder and which has only recently been digitally enhanced.

It was because of dissatisfaction with the abilities of the Dallas police department to carry out a proper investigation into the events surrounding the death of his predecessor and the subsequent execution of prime suspect Lee Harvey Oswald by nightclub owner and Mafia odd-job man, Jack Ruby, that President Lyndon B. Johnson ordered the setting up of the Warren Commission.

The commission duly reported that the assassination of the president had simply been the work of the deluded former US Marine and Communist sympathiser Lee Harvey Oswald. But in reaching this simplistic conclusion the commission had ignored the testimony of a huge range of witnesses – witnesses not only to the shooting but also to crucial events both before and after the shooting. It would appear the commission chose to ignore testimony that did not fit its already preconceived version of the record of events. The fatally flawed Warren Commission official report begged as many questions as it answered.

Independent investigators had pointed to numerous inconsistencies in this official version of events. It was their dogged persistence that eventually led to another investigation by the House Select Committee on Assassinations. The three-year investigation concluded in 1979 that there probably had been a conspiracy to murder President Kennedy. No conclusion was reached, however, on who may have been behind the conspiracy. Thirteen years later, in 1992, the John F. Kennedy Assassination Records Act was passed by Congress – ironically because of public pressure following the release of the Oliver Stone movie, JFK, itself a veritable hotchpotch of conspiracy theories. Despite the subsequent release to researchers of hundreds of pages of documentation relating to the assassination, thousands more – mainly in the form of both CIA and FBI records – remain hidden. It is unclear if these remain secret to cover up complicity, incompetence, or a combination of both.

If there was a conspiracy, who was responsible? Who would have been able to plan, fund and – literally – execute such a complex operation? We can only speculate – but speculate to a reasonable degree of probability. Was it the Mafia? The American intelligence community? The Soviets? Disgruntled US right-wingers? Cubans in the pay of Castro? Cubans who were both anti-Kennedy and anti-Castro? A combination of some, or all, of these groups? We will examine their possible role in our section ‘In The Frame’, after we examine what is known about the events in Dallas on Friday, November 22, 1963 and the evidence from the Zapruder film and other sources that the Warren Commission chose

The more people seek, the more Temple of Mysteries will reveal.

I have been interested in the JFK assassination for the last 20 years. Back when I started there wasn't much material for a newbie to the case. The only books and other materials readily available to me was Groden and Livingstone's High Treason, Stone's "JFK", Life magazine's "Life in Camelot", and the documentary "The Men Who Killed Kennedy". After reading this book, it made me wish I had this when I started reading about the assassination back then. Temple of Mysteries goes though all of the theories that have been proposed over the last few decades. This includes notable theories involving LBJ, the CIA, and the Mob and lesser known theories such as the one that accuses the driver of firing the shots. Besides going over the various theories, I like the way the authors examine each one with a healthy dose of skeptism. I also like how they go into the life of New Orleans mob boss Carlos Marcello. I did not know anything about him before this. The only thing I object to is the bias towards conspiracy in the first chapter. I don't like this because while the authors can make a case for conspiracy, one can also make a case for a lone gunman. Overall, I feel this book is a good choice for a newcomer to the case or for someone who likes to read about history.

You have subscribed to alerts for TempleofMysteries.com.

You can also sign-up to receive email notifications whenever TempleofMysteries.com releases a new book.