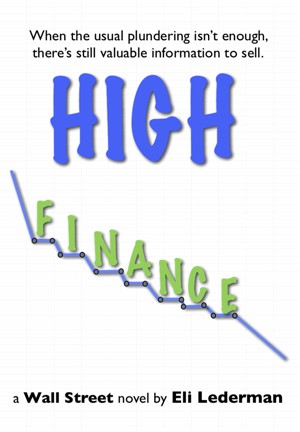 By Eli Lederman
When the usual plundering is not enough, there's still valuable information to sell. A riveting story told by a consummate Wall Street insider. Hilarious. Outrageous. Timeless. More
Jerry Klein trades exotic derivatives for a major New York investment bank, happily minting money while mechanically progressing through the ranks as a self-described “perfect robot.” When he’s promoted to managing director and appointed to a client-facing role, Jerry experiences his firm for the first time in the context of the wider financial system where, driven by intense competition for profits and pay, the bank and its traders cut corners to take ever-greater risks. While senior executives battle for power over businesses they no longer understand, the firm they’re meant to manage loses its way, and casual abuse of rules crosses into flagrant violation of law. As he navigates the rows and aisles of trading floors in a quest to understand a complex business with sky-high stakes, Jerry uncovers an insider trading operation involving colleagues and prominent hedge funds. Set over ten days in the run-up to the credit crisis, HIGH FINANCE opens a window on the investment banks and hedge funds that figure so prominently in modern markets. Want to know more about a world where marginal talents and dubious ethics reap richest rewards? Read this book. HIGH FINANCE comes with one important warning: it might just make you want to occupy Wall Street!
Available ebook formats: epub mobi pdf rtf lrf pdb txt html
First 20% Sample: mobi (Kindle) lrf pdb Online Reader
Price: $5.69 USD
Buy Add to Library Give as a Gift
How gifting works
Create Widget
Tags: finance hedge fund bank trading stock market
About Eli Lederman

Eli Lederman was born in New York City in 1963. A graduate in physics from Brown University, he received a Ph.D at NYU before spending two years as a post-doctoral fellow at Harvard. During a fourteen year career at Morgan Stanley, half in New York and half in London, Eli was a managing director who established innovative new businesses in electronic trading and financial technology. From 2007 to 2010, he was the chief executive of a pan-European stock market owned by several of the largest investment banks in the world. He has been a landscaper and a lifeguard, prep cook and head cook, teacher and professor, semiconductor engineer and salesman; he has washed dishes and bused tables, painted houses, delivered flowers and tended bar, among other jobs. Since 2001, Eli has lived in England with his wife and three children.

You have subscribed to alerts for Eli Lederman.

You have been added to Eli Lederman's favorite list.

You can also sign-up to receive email notifications whenever Eli Lederman releases a new book.