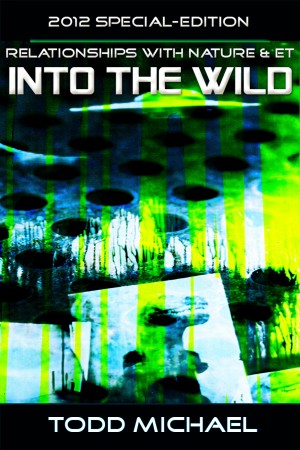 Into The Wild: 2012 Special-Edition

By Todd Michael
This 2012 Special-Edition includes some 50 photos and video! The second book of his contact series, Todd Michael takes readers beyond the initial contacts of book one and into the next phase: "relationships" with ETs and other beings. He's included another 50+ personal contact experiences out of the hundreds he's had to give readers an idea of what's ahead for Humankind. More
In a relatively brief span of time, Todd Michael guided hundreds of skywatch and contact tours for well over 1,000 people. The contact experiences shared with tour participants and friends have been documented for reader's enjoyment in what Todd says is his "contact series."

In his first book of this series, "Alien Contact," Todd included more than 50 real contact experiences to help readers understand what's possible and how it was done. He also discloses common obstacles people face when attempting contact and how to overcome them.

Book two, "Into The Wild," is intended for people who have already made contact or are actively doing so, and may want to move forward in friendship with their visitors. Todd experienced several levels of relationship with various beings and shares some of it here. Again, he's incorporated another batch of 50-plus encounters for readers to learn from.

Now with "Bigfoot," his final book of the trilogy, Todd continues in his usual form sharing his own Bigfoot contacts, many were as recently as August, 2012. Graduating from the relationships discussed in his second book to the ultimate human relationship, he says, is with Bigfoot! Within the last 5 years his contact locations include Arizona, California, Montana, New Mexico, and Washington.

People will find the idea that Bigfoot has been interacting with humanity on our level, simply fascinating, with dozens of his own Bigfoot encounters, several of which were face-to-face. "Bigfoot: The Four Levels of Contact" shows how this was done and even compares our social structure to theirs, which ultimately serves as a template for individual contact. The 2012 Special-Edition of Bigfoot contains 100 photos.

Todd has lived in or toured 35 states in the USA as well as 7 foreign countries on 4 continents. He has worked for State and Federal governments and within corporate American franchises.

Beginning in 2005, he opened up to what some readers will refer to as a Spiritual Awakening. During this period of his life, Todd engaged other beings in conversation and relationship, as he discusses in his three books.

About four years later, Todd landed at the Ye Olde UFO Store in Sedona, Arizona, where he contributed his time and efforts to help curious humans experience contact for themselves, based on his own experiences and understanding as a Skywatch Tour Guide.

Todd often shared with his Skywatch groups the idea of moving toward friendship or relationship with other beings – but only when they were ready. To help people see that it’s really possible and that they’re willing to do so, they routinely revealed themselves in person and sometimes allowed their ships to be seen in very close proximity. In several instances, beings were photographed while standing next to someone. “There’s a lot to take in when you want to experience contact first-hand,” he says, “and it’s most definitely life-changing when it happens. You’ll never be the same!”

In his three-part contact series, Todd begins by sharing what’s possible in terms of making contact and how he did it, before taking readers into the benefits of relationships with his visitors and finally, the ultimate Human relationship – with Bigfoot!

Each book is available in a text-only version or as a 2012 Special-Edition, which includes photos.

You have subscribed to alerts for Todd Michael.

You have been added to Todd Michael's favorite list.

You can also sign-up to receive email notifications whenever Todd Michael releases a new book.