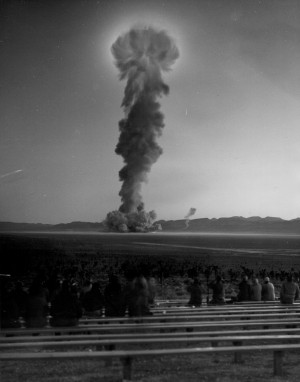 No One Knew Us

This book is about Underground Nuclear testing at the secret Nevada Test Site and people who worked there. More
My book tells about a select group of people who did the HOW of underground nuclear testing. The interviewees I chose, set the standards for a task thought impossible or impractical at best.
Scientists roam the halls of congress selling nuclear bombs. They start testing in the atmosphere but later are told they can design their bombs but they must test underground. They specify the tests needed to prove their designs and ideas but they have little knowledge on how to build the structures needed for the tests. It took the dedication and talent of skilled craftsmen to bail them out.
In 1963 nuclear testing went underground. That presented a problem to the scientific community. "Where" do we test a nuclear bomb underground? Answer: Pick a location in a remote area, an area that no one wants, like the Nevada Desert.
The scientists received their data from the tests. The people who build the systems that make it possible are rewarded with conditions that ran the gamut from extreme cold to blistering heat, dust, and long hours away from their families
I decided to choose those I consider a representative group. The workers who typify most of the work force at the Test Site, role models if you will. I know them personally and admire their dedication.
They are pioneers who travel more than one hundred miles one-way. They set the standards for excellent quality craftsmanship.
Most of the material is from personal interviews with those involved in the different topics I chose for the book. People I worked with for 28 years. They did the job that kept the free world free.
Eighty-four percent of the material is from interviews. Six percent, from sources listed in the Sources section and ten percent from personal experiences.
How do I know it was eighty-four percent? I don’t, it’s a guess. Okay?
The first Chapter delves into the history of nuclear testing and the paranoia that has two major powers (the United States and Soviet Russia) believing they have to test in order for their form of government to survive. Their survival is based on the doctrine of “Mutual Assured Destruction”.
Mutual Assured Destruction (MAD) is a doctrine of military strategy and national security policy in which a full-scale use of nuclear weapons by two opposing sides would effectively result in the destruction of both the attacker and the defender, becoming thus a war that has no victory nor any armistice but only total destruction. It is based on the theory of deterrence according to which the deployment of strong weapons is essential to threaten the enemy in order to prevent the use of the same weapons. The strategy is effectively a form of “Nash Equilibrium” in which neither side, once armed, has any incentive to disarm.
Material for chapter one is from a variety of sources
I start my career at NTS in 1965 working for Edgerton Germeshausen and Grier (EG&G in 1965. In 1968 I transfer to the Lawrence Livermore Laboratory, known at that time as Lawrence Radiation Laboratory (LRL). I retired in 1993. The most of this book is about incidents that occur while I worked for the Lab at the NTS.
The chapters following the first, is about underground testing, a most difficult period. It presented difficult challenges for construction, engineering and scientific workers. I don't see people like the Test Site workers anywhere in government. If you are out there send us a FAX.

Born in Rutland Vermont. Joined the USAF in 1950. Rose to the rank of 1st Lt via the USAF cadet program. Flew in B-47, B-36,
B-52.
Left the air force in 1957 to attend College. Received BS degree in Physics from the University of Tampa (FL). Upon graduating I went to work at the Nevada Test Site in 1965 and retired from there in 1993. Married 58 yrs to My still pretty wife Myrtle. Two children Patrick and Michael now deceased. Three grandchildren and two great grandchildren.
I don't twitter,tweet, nor face. I twinge, squeal, and wear a frown.

You have subscribed to alerts for Bob Knipes.

You have been added to Bob Knipes's favorite list.

You can also sign-up to receive email notifications whenever Bob Knipes releases a new book.