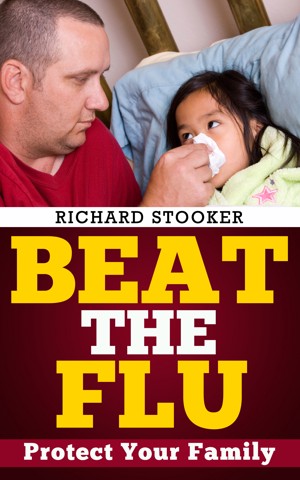 By Richard Stooker
Flu experts agree -- a severe pandemic is just a matter of time.

But there are many other ways to protect yourself and your family. They are cheap and widely available. Everybody can take steps to protect themselves and their families.

BEAT THE FLU is a comprehensive guide to build your immune system to prevent and treat the flu. It explains the proprietary 7 Perimeter Defense System. More
Flu experts agree -- a severe pandemic is just a matter of time.

*** NOTE: This is an all-original, all-unique work. The Table of Contents is fully linked. ***

But there are many other ways to protect yourself and your family. They are cheap and widely available. Everybody can take steps to protect themselves and their families.

The nightmare is another 1918-style flu that is both highly contagious and highly lethal. It could kill tens of millions of people around the globe.

Ordinary, seasonal flu kills from 20,000 to 40,000 Americans per year, and an unknown number of people in other countries.

Swine flu has already mutated into forms resistant to both vaccines and Tamiflu.

BEAT THE FLU is a comprehensive guide to build your immune system to prevent and, if necessary, treat the flu.

Praise for BEAT THE FLU:

"This is a TON of information that can literally save lives. The solutions you give are simple and easy to implement.

"Whatever price you pay for this book is going to be well worth it. After all...what price can you put on your life and the lives of your family?" -- Enigma Valdez

"The 7-Perimeter Immune Defense System is a comprehensive immunity-boosting plan. When followed correctly, it will literally build an internal fortress of protection against the bird flu. This system will save lives!

"I have seen books selling at twice the price that don't even have half the information."
-- Clint Fountain

"I have studied alternative health for many years... and still I found many nuggets of smart advice I hadn't thought of, forgotten, or flat out didn't know before I went through your flu book. Well done!" -- Jim Van Wyck

"Brings the facts to us in a clear, well-written style.

Richard Stooker hails from the Mississippi River town of Alton, Illinois, warping him for life.

Rich in history, Alton provides a combination of the idyllic Illinois background Ray Bradbury wrote of; the Mississippi River and bluffs of Mark Twain; and a rich, unique history -- often violent.

From the Indian legend of the Piasa Bird, to the tallest man who ever lived (Robert Wadlow), to the assassin of Dr. Martin Luther King, Jr., James Earl Ray.

Richard's childhood home stands close to the route where Union wagons once carried the corpses of Confederate prisoners who died of smallpox. At 8 years old, he first hears of James Earl Ray, (who later assassinates Dr. Martin Luther King, Jr.) Ray robs a grocery story owned by the grandparents of close neighbors and friends.

In 1974 a still-unknown murderer abducts one of Richard's friends from a record store and kills him. Several years later, the father of other childhood friends goes on a jealousy-inspired, mass murder spree, killing three people -- including Richard's high school class president -- before committing suicide.

Richard's over 30 years for a social service government agency gives him a broad background of dealing with both the worst and best people in modern society.

When he writes, Richard realizes the horror and joy of every day life inspire dark fantasy stories.

You have subscribed to alerts for Richard Stooker.

You have been added to Richard Stooker's favorite list.

You can also sign-up to receive email notifications whenever Richard Stooker releases a new book.