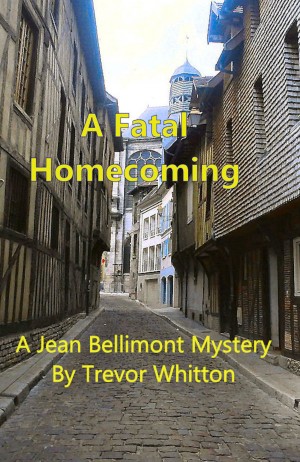 By Trevor Whitton
France 1310: The body of a stranger is discovered, and, as Bailli Dubois begins his investigation, it becomes apparent that the wife of his best friend is implicated. He dispatches his clerk - Jean Bellimont - to Paris in the hope of uncovering new evidence. The story culminates in a dramatic courtroom scene in which the murderer is finally revealed.

This is the 3rd of the Jean Bellimont novels. More
France, 1310: In the woods outside the market town of Troyes, a forestier stumbles across the body of a stranger.

As Henri Dubois - the local Bailli - begins his investigation, it soon becomes apparent that the discovery threatens to implicate the wife of his best friend, Richard Beauchamp. Hopelessly compromised, he is forced to relinquish responsibility to the Dean of the Guild of Merchants - an outspoken enemy of both Henri and Richard. Unable to officially pursue his own investigation and with Madame Beauchamp in imminent danger of arrest, Henri dispatches his clerk, Jean Bellimont, to Paris in the desperate hope of uncovering fresh evidence. Amidst the squalor of the medieval capital, Jean encounters the execution of a heretic and follows a trail of clues which eventually leads him back to Troyes. In the meantime the Dean of the Guild has fabricated evidence against the Beauchamps, and Richard and his wife are forced to seek the sanctuary of a nearby convent. Mercenaries are despatched to find them, and a game of cat and mouse develops between the fugitives and their pursuer. Back in Troyes, a second murder appears to bring Jean and Henri’s investigation to an impasse, and, when the innocent woman is finally arrested and brought to trial, Jean and Henri have a race against time to save her from the gallows.

The novel is meticulously researched and plunges the reader into an accurate and absorbing account of life in medieval France. It provides added depth and authenticity through historically accurate incidents, and includes several back-stories which weave neatly into the main narrative. Clues are revealed which are both subtle and plausible, and draw the protagonists towards an inevitable but surprising solution. Culminating in a dramatic courtroom scene where the true murderer is revealed, the threads of all the stories are resolved into an emotional and satisfying conclusion.

A Fatal Homecoming is the third of the Jean Bellimont novels.

What some readers have had to say:

"I love a good mystery and I can count on not knowing who did it till the end with this writer."

"An excellent 'WHO DONE IT' Although the real murderer was introduced quite early on, I never suspected who it was right until the end. Loved the story."

I am a retired recruitment consultant with a strong interest in European medieval history, and endeavor to weave that knowledge into my story lines. My travels throughout Europe (and particularly France) over the past thirty years allows me to bring a first hand account of the places I describe, and provides an air of authenticity to my narrative. I am a passionate and committed writer, and Pilgrimage is the first of a trilogy featuring Jean Bellimont, Scribe of Troyes.

You have subscribed to alerts for Trevor Whitton.

You have been added to Trevor Whitton's favorite list.

You can also sign-up to receive email notifications whenever Trevor Whitton releases a new book.