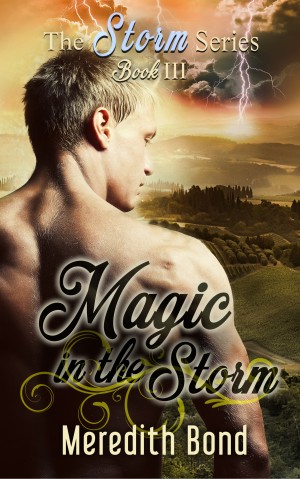 Magic In The Storm

Rated 4.00/5 based on 1 reviews
A coming storm…
As the summer solstice approaches, the electricity crackling between Morgan and Adrian is only a prelude to the building tempest crackling across the skies. There’s magic in the storm they create together, but to fulfill their destinies, each must find the key to unlock the powers in the other and claim the most powerful magic of all. More
Destined for power…
Prophecy foretold the coming of one who would be the most powerful of the Vallen, destined to renew their magical energies. Born male, instead of the anticipated female, Morgan Vallentyn is outcast from birth, banished to the forest by his vengeful mother. His magic weakened, and caged by unknown forces, one goal drives Morgan: if he can’t harness his powers by his birthday, another will take his destined place.

Bound by convention…
Adriana Hayden paints with rare passion and vision. But Regency England is no place for such an unconventional woman. Fleeing from a proposed marriage arranged by her domineering guardian, Adriana escapes to the forest and into the arms of a mysterious man with strange powers. A man who unleashes forces she never suspected existed.

A coming storm…
As the summer solstice approaches, the electricity crackling between Morgan and Adrian is only a prelude to the building tempest crackling across the skies. There’s magic in the storm they create together, but to fulfill their destinies, each must find the key to unlock the powers in the other and claim the most powerful magic of all.

Please note that while the first two books in the Storm Series are "sweet", this book is not.

The Storm Series:
STORM ON THE HORIZON
BRIDGING THE STORM
MAGIC IN THE STORM

Meredith Bond's books straddle that beautiful line between historical romance and fantasy. An award-winning author, she writes fun traditional Regency romances, medieval Arthurian romances, and Regency romances with a touch of magic. Known for her characters “who slip readily into one’s heart,” Meredith loves to take her readers on a journey they won't soon forget.
Merry has two independent children and a loving, supportive husband. She resides in Washington, DC enjoying the freedoms of having an empty nest.
Merry loves connecting with readers. Be sure to find her:

About the Series: Storm

Magic in the Regency -- there is more to some members of the ton than you realized.

(I was given this book for free by the author on a read-to-review basis)
The year is 1815, and Adriana lives with her cousin – Lord Devaux, following her parents death when she was only six. Now a young lady, Lord Devaux has her plan and host his parties, which he throws to further his political career.

Adriana dislikes Lord Devaux because he allows her no freedom. Her passion in life is her painting which she has done since the death of her parents, and she plans to sell her work, and hopefully earn enough money for her to leave Lord Devaux, and take her good friend Henrietta (her nanny) with her as well.

Now though, Lord Devaux has other plans for Adriana. He plans to marry her off to Lord Vallentyn; a wealthy man, whose mother is trying to get him into politics. Adriana is not happy with this arrangement, and refuses Lord Vallentyn’s proposal. This is unacceptable for Lord Devaux though, and the pair go to the Vallentyn’s estate in the country, to give Vallentyn a chance to woo Adriana, even though he too is being forced into the marriage.

A few days later whilst horse riding on Vallentyn’s estate, Adriana gets caught in a storm, and a tree falls on her, breaking her leg and pinning her. A man comes to her aid, and although she can’t believe what is happening, he lifts the fallen tree from her leg, places his hands on the break, and heals her broken bone. Against his better judgment, he tells her that his name is Morgan, then sends her home before she can become injured again in the storm.

Not understanding what has happened to her, she confides in Lady Vallentyn who convinces her that she dreamed the incident, and forbids her from riding in the forest again. What Adriana doesn’t know however, is that the Vallentyn’s are a family of powerful Vallen’s, which means that they have an innate magic that they can use. Each individual has different levels of power, and different abilities. Morgan has only a little magic, which shows itself as an ability to heal, and the ability to communicate with animals, while Lady Vallentyn is the high priestess of the Vallen, and is extremely powerful. When speaking to people she infuses magic into her words so that they have no choice but to obey her.

The next day, paying heed to Lady Vallentyn’s instructions, Adriana leaves her horse, and walks into the forest with the intent of finding Morgan. On finding him she is shocked to see him swimming naked, and after drawing a sketch of him runs away! She is bolder the next day though, and the pair talk and are immediately attracted to each other, and soon Adriana is sneaking away to visit Morgan every day.

Lady Vallentyn will stop at nothing to get her son Lord Vallentyn into politics however, and she is convinced that the best way to do this is to have him wed to Adriana who already knows all about entertaining for Lord Devaux. Lady Vallentyn uses her magic to convince Devaux and Vallentyn that this wedding must happen, and Devaux threatens Adriana that if she does not accept the marriage he will have every one of her paintings burned, which would destroy her.

One day whilst visiting Morgan, things go a little further than kissing for Adriana, and she realises how inappropriate the relationship is for an unmarried woman, and does the only thing that she can think of to remove herself from temptation – she accepts Lord Vallentyn’s proposal, and goes with Lord Devaux back to London.

Morgan’s cousin Kat, tells him that his mother has told her that one day soon Morgan will lose what little power he has, and that it will instead go to Kat, who Lady Vallentyn has chosen as a replacement for Morgan. Kat is the sixth daughter of a sixth daughter, and Lady Vallentyn has realised that this will have to make do. When Morgan hears this news he is upset. It is bad enough to have such little power, but to have even that taken from him would be unthinkable.

This news, paired with the shock departure of Adriana spurs him to action. His powers have been increasing very recently (although he doesn’t know why), and he feels bold enough now to challenge the magic that his mother has which is keeping him in the forest, and heads to London. Now he must find out how to attain his full powers before they can be taken from him, as well as finding Adriana who he has fallen in love with, and all before his mother catches up with him.

I really enjoyed this book. Adriana and Morgan were just so right together, and their blossoming romance was really sweet. The threat that Lady Vallentyn posed was very real, and even though she had magical powers was still relatable – who doesn’t have problems with either their mother or mother in law meddling?!

Although the novel was set in 1815, I actually kept forgetting that! It wasn’t historical-boring, but more just that that was the time the story took place in and it made sense. The pace was just right, and kept you interested, leaving you guessing as to what Lady Vallentyn’s next move would be, and hoping that Adriana and Morgan would somehow find their way back to each other.

This novel is a true paranormal romance that doesn’t involve the normal vampires/werewolves etc., which sets it apart and is a refreshing change. It is very well written and entertaining, and is definitely up there and on par with the works of people like Christine Feehan!
Well done Meredith Bond and thanks so much for such a great read!
8 out of 10.
(Book Length: 6526 Kindle Locations)

You have subscribed to alerts for Meredith Bond.

You have been added to Meredith Bond's favorite list.

You can also sign-up to receive email notifications whenever Meredith Bond releases a new book.