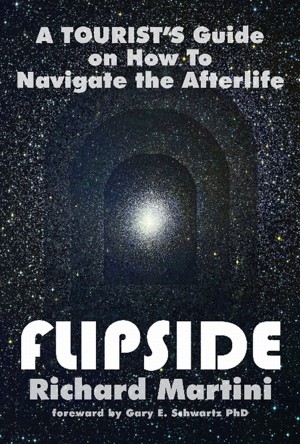 Flipside: A Tourist's Guide on How To Navigate the Afterlife

By Richard Martini
What happens after we die? "Flipside" explores startling new evidence for life after death, via the "life between lives," where we reportedly return to find our loved ones, soul mates and spiritual teachers. Based on the evidence of thousands who claim that under deep hypnosis they saw and experienced the same basic things about the Afterlife; features interviews with Michael Newton and others. More
What happens after we die?

Author and award winning filmmaker Richard Martini explores startling new evidence for life after death, via the "life between lives," where we reportedly return to find our loved ones, soul mates and spiritual teachers. Based on the evidence of thousands of people who claim that under deep hypnosis, they saw and experienced the same basic things about the Afterlife, the book interviews hypnotherapists around the world trained in the method pioneered by Dr. Michael Newton, as well as examining actual between life sessions. The author agrees to go on the same journey himself, with startling and candid results, learning we are fully conscious between our various incarnations, and return to connect with loved ones and spiritual soul mates, and together choose how and when and with whom we'll reincarnate. The author examines how "Karmic law" is trumped by "Free will," with souls choosing difficult lives in order to learn from their spiritually; no matter how difficult, strange or complex a life choice appears to be, it was made in advance, consciously, with the help of loved ones, soul mates and wise elders. Extensively researched, breathtaking in scope, "Flipside" takes the reader into new territory, boldly going where no author has gone before to tie up the various disciplines of past life regression. near death experiences, and between life exploration. In the words of author Gary Schwartz, Phd, once you've read "Flipside" "you'll never see the world in the same way again."

"Richard has written a terrific book. Insightful, funny, provocative and deep; I highly recommend it!"
Robert Thurman ("Why the Dalai Lama Matters")

“Inspiring, well written and entertaining. The kind of book where once you have read it, you will no longer be able to see the world in the same way again.”
Gary E. Schwartz (“The Sacred Promise”)

Flipside the Documentary
The documentary of the book is now available at www.flipsidethefilm.com - it's a 90 minute version of the book.

Flipside: My Journey into the Afterlife
The book is based on the documentary film that I've made on the topic - so the documentary is "Flipside: My Journey into the Afterlife (available at flipsidethefilm.com) and the books is "Flipside: A tourist's guide on how to navigate the afterlife (available at flipsidethebook.com) - doc is 90 minutes and features an interview with Michael Newton and then actual filmed LBL sessions.

Reviews of Flipside: A Tourist's Guide on How To Navigate the Afterlife by Richard Martini

You have subscribed to alerts for Richard Martini.