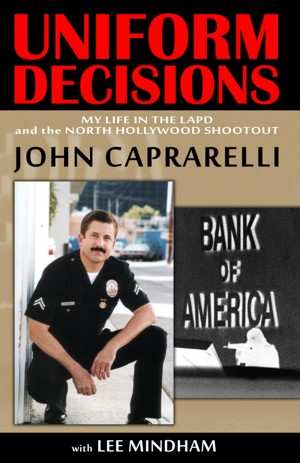 Uniform Decisions: My Life in the LAPD and the North Hollywood Shootout

After a botched robbery at a Bank of America branch in North Hollywood, two robbers armed with fully automatic assault rifles and wearing full body armor fired more than 1,100 rounds as they battled police.

Officer John Caprarelli was one of the first officers at the scene. Before a national TV audience, he confronted one of the robbers, provoking a gun battle and exchanging numerous shots before the gunman fell.

Officer Caprarelli was awarded the LAPD’s highest honor, the Medal of Valor, as well as a National Top Cops Award. In this memoir, John gives the reader a rare glimpse into his private life along with vivid recollections of events during his 27 year career with the LAPD culminating with a detailed breakdown of his thoughts and actions during the infamous bank robbery.

John Caprarelli was born in Los Angeles, California in 1957. Retired from the Los Angeles Police Department after working a cross section of assignments, his involvement in the infamous 1997 North Hollywood Bank of America robbery shootout was the pinnacle of a 27 year police career that earned him the Medal of Valor and National Top Cop awards. Between hobbies, he continues to speak at various venues regarding his career and life lessons learned.

Retired LAPD Officer Remembers North Hollywood Shootout As 15th Anniversary Nears
NORTH HOLLYWOOD (CBS) — It’s one of those events that everyone has a story about. The date was February 28, 1997. Where were you when the North Hollywood shootout happened? LAPD Officer John Caprarelli didn’t get to watch it unfold live on TV like most of us — he was on the frontlines.

You have subscribed to alerts for John Caprarelli.

You have been added to John Caprarelli's favorite list.

You can also sign-up to receive email notifications whenever John Caprarelli releases a new book.