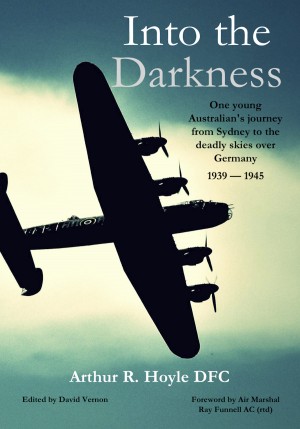 By Arthur R. Hoyle
Rated 5.00/5 based on 6 reviews
"Into the Darkness" is the true story of a young Australian thown into the crucible of the air war over Europe. Navigator, Arthur Hoyle, discovers the excitement, the comraderie and the fear of being part of Bomber Command. This book dramatically recreates the the trials of air crews over the dark skies of Europe — where the chance of surviving the full ‘tour’ was very low. More
Our Lancaster raced over the perimeter track and then tore down the slope through the dispersal area... with its wheels thumping on the grass but still firmly on the ground. It now seemed that nothing could save us and that, in the next couple of moments, we would disappear in a great explosion. I could hear Bob saying “Get off the ground, you bastard, get off,” while Harry just said nothing...

"Into the Darkness" is the true story of a young Australian thown into the crucible of the air war over Europe. Navigator, Arthur Hoyle, discovers the excitement, the comraderie and the fear of being part of Bomber Command. Intelligently written this book dramatically recreates the the trials of air crews over the dark skies of Europe — where the chance of surviving the full ‘tour’ was very low. Close to half of all Bomber Command crew who took off into the darkness never returned.

Arthur Robert Hoyle was an Australian historian and biographer. Born in Sydney, Australia he served in the Royal Air Force as a navigator during World War II and was awarded the Distinguished Flying Cross. He served in the Australian Public Service and later taught Administration at the University of Canberra. He holds the degrees of BA (Hons) and Dip Ed (University of Sydney) and M.SocSci (University of Birmingham).

I first read this book in March and have only just re-read it. I think this is a record for me with a non-fiction book. Fancy reading the same book twice! This is a poignant but not excessively maudlin autobiography of a young man heading off on his greatest ever adventure. He never thought of the blood, the burns or the horror when he enlisted. A shock for a young man. However, this book, written many years after the events took place carefully and pragmatically take the reader on the same journey as this young man. This is an excellent read for anyone with a passing interest in the horror of World War II and what motivates men to fight.

This is a touching, thoughtful and intelligent book. These stories must be told to new generations and when they are told in such a literate manner, they are a delight to read. Elements of Arthur's story are poignant, tragic, exciting and even funny. This is fine book and a wonderful testament to a brave man. I was sorry to hear that he has passed away. Vale Arthur Hoyle, DFC

Low flying over the long beaches of Rhyll, the crew of the Lancaster buzzed a couple making love in a row boat... this book is full of anecdotes, both serious and funny. These anecdotes make the bleak world of wartime Europe come alive. I can add little to Bronnie Wu's review. This is a masterful book. Such a shame the author has died. RIP.

I'm well versed with the trials and tribulations of Bomber Command (having airforce personnel in my family who liked telling me my history) and so I wasn't sure what I would get out of this autobiography. My worries were ill-founded. This is a fascinating personal account of a man at war (not only with the enemy, but at times with himself and his feelings of what he is going through). Arthur Hoyle is one of those unsung heroes who quietly did his job and saw and experienced some amazing and terrifying things. Well written, literary, historically-accurate this is a five star read.

I enjoy memoirs but usually not war memoirs. However, this is an excellent historical account which intelligently examines not only all the biffo of military life but also puts it into the broader historical and social context of the time. This is a great read and adds considerably to my knowledge of this dreadful time.

This is a highly literate account of one man's experiences in dealing with the terrors of being a navigator in a Lancaster in WWII. It is beautifully written and makes one sorry when it is over. A fascinating book.

You have subscribed to alerts for Arthur R. Hoyle.

You have been added to Arthur R. Hoyle's favorite list.

You can also sign-up to receive email notifications whenever Arthur R. Hoyle releases a new book.