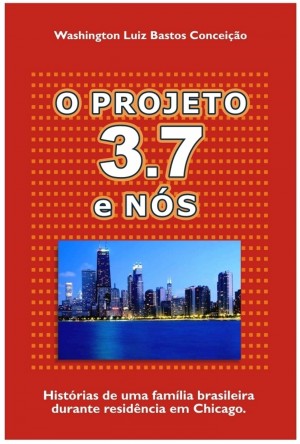 The stories deal alternately with the author's work activities in Chicago and the family living in a suburb. In the office they focus on the singularities of the interaction among coworkers from several countries who formed a multicultural international team, very interesting, called by themselves "The Little United Nations". At home, the couple's and the children's everyday life in environment very different from which they had in Sao Paulo City, where they came from. New situations came up very often. As it is his style, the author writes as if he were talking to the reader, in a friendly conversation way.

Washington Luiz Bastos Conceição was born in Ponta Grossa, Parana, Brazil. He has grown up in Sao Paulo, city where he has studied and got married.
He is graduated from the "Escola Politecnica da Universidade de Sao Paulo" (the Engineering School of Sao Paulo State University).
After working as a Civil Engineer for about four years, he was hired by IBM Brazil in Sao Paulo. In 1968 he was assigned to an international IBM project in Chicago. Transferred to the Company's headquarter in Rio de Janeiro in 1970, he since then lives in that city. After leaving IBM, where he worked for 24 years, he has proceeded with his activities in the Marketing, Sales and Business Consulting areas, until 2009.
He published his first book, the “Histórias do Terceiro Tempo”, in 2009, when he was 76 years old. The second, “Para você se animar a escrever seu livro”, in 2010, and the third one "O Projeto 3.7 e Nós", in 2011.
He says that he has more stories to tell and that he intends to keep on writing as long as this activity gives him pleasure and provided his physical conditions allow him to do it.

You have subscribed to alerts for Washington Conceicao.

You have been added to Washington Conceicao's favorite list.

You can also sign-up to receive email notifications whenever Washington Conceicao releases a new book.