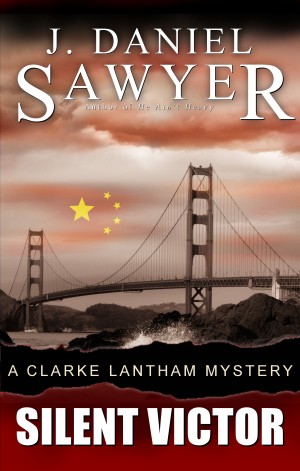 By J. Daniel Sawyer
Rated 4.50/5 based on 2 reviews
Clarke Lantham got a good chuckle when a world-famous alien hunter tried him to prevent an attack on San Francisco. He stopped laughing 12 hours later when gray aliens apparently stole a priceless artifact in full view of security cameras. But when takes the case, he finds himself working against the Chinese Government and the FBI.

The California Academy of Sciences, a bastion of integrity in scientific public relations, has agreed to play host to one of the most valuable traveling exhibits in the world: a Mars rock with microbial alien life. But the attention it's drawing isn't just international, it's interstellar. When a commando team of Gray aliens steals the rock and abducts a security guard in full view of the cameras, the head of the security contractor has only one place to turn: Clarke Lantham Investigations.

Clarke Lantham already turned down an alien-related job earlier in the week, and has had his fill of kooks, cranks, and crooks of all kinds. Unfortunately, with an old client suing him, a employee to pay for, and a new ward chewing through his finances, he needs the paycheck. This time, though, he's not the only one looking for a missing person: the FBI, Lloyd's of London, and the Chinese Ministry of State Security are all breathing down his neck.

From the dark underbelly of the Tongs slave trade to the shark-infested waters of Bolinas Bay to the skies far above the concerns of mere mortals, Lantham races against spies, assassins, and conspiracy theorists to find the missing man--and the treasure that went with him--before the theft becomes a diplomatic incident between the world's most fearsome superpowers and the alien overlords they allegedly support.

When the field gets that crowded, someone's bound to get hurt. But even that might be okay for Lantham...if he didn't have to sleep on the couch.

WHILE STAR WARS and STAR TREK seeded J. Daniel Sawyer's passion for the unknown, his childhood in academia gave him a deep love of history and an obsession with how the future emerges from the past. This obsession led him through adventures in the film industry, the music industry, venture capital firms in the startup culture of Silicon Valley, and a career creating novels and audiobooks exploring the worlds that assemble themselves in his head. His travels with bohemians, burners, historians, theologians, and inventors led him eventually to a rural exile where he uses the quiet to write, walk on the beach, and manage a pair of production companies that bring innovative stories to the ears of audiences across the world.
For stories, contact info, podcasts, and more, visit his home page at http://www.jdsawyer.net 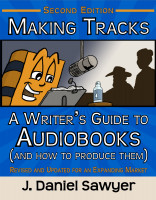 Every once in a while, I read a book that leaks through the walls we build as fans, writers, and publishers. Then there are books like Silent Victor: A Clarke Lantham Mystery by J. Daniel Sawyer (Smashwords / Amazon) that kick through those walls and do mean things to them while they’re down.

At its core, this book continues in the vein of the other Lantham stories. That is to say, it’s as close to a traditional noir as anything Dan does is close to anything “traditional”. A long time genre blender, Dan takes this story and infuses science fiction into its warp and weft. Lantham is handed perhaps the strangest case in a long line of strange cases. A meteorite has been stolen from the California Academy of Sciences. If that’s not SF enough, it was taken by a commando team of gray aliens who also abduct and ostensibly probe a security guard, in full view of the cameras. Okay so the probing doesn’t happen in view of the cameras, but there’s evidence.

Like his other cases, Lantham must get at the reality behind the appearances. Sometimes, and this case is no different, the truth he uncovers is stranger than the fiction. There’s also a good deal of science laced throughout the book, so I’m okay with hosting the review here, however tenuous calling this science fiction may be.

This is the longest book in the series and as such it does move more slowly. Dan has more time to weave the complex plot threads he loves with the rich characters he always develops. The risk there is that we as the audience have time to breathe. In past stories the pace has always been breakneck and that provided a great source of tension. That’s not to say this book is lacking in that department. With international incidents, shootouts, murders, explosions, and car chases aplenty; he does keep the pace up, but there are also times where things taper off.

Other books might get bogged down in those in between places. That generally doesn’t happen here. Dan uses those times to twist the knife/throwing star in Lantham’s flesh. I did find myself checking the number of pages I had left once or twice, but again I credit that with being used to much shorter stories featuring these characters.

On that note, one of the things I loved about this book was more Rachael. Lantham’s partner in training, she provides a great deal of comic relief and sass. She takes no BS from her boss and there are a couple of great scenes where he’s teaching her the craft. I humbly request, nay DEMAND more screen time for her. He promises us several more Lantham books to come, so a fan can hope. As usual there’s also the matter of the setting being a “character”. The Bay Area is brought alive in these stories and is crucial to nearly everything that happens from the chase scenes to the culture.

I’m sure it’s evident by now that I enjoyed this book. I give it four and a half Grays out of five. It loses a little for the aforementioned occasional slow bits. If you like your noir spicy with a bit of SF then check it out!

Great Lantham story ! Keeps us on the edge of our seats with all the action !

You have subscribed to alerts for J. Daniel Sawyer.

You have been added to J. Daniel Sawyer's favorite list.

You can also sign-up to receive email notifications whenever J. Daniel Sawyer releases a new book.