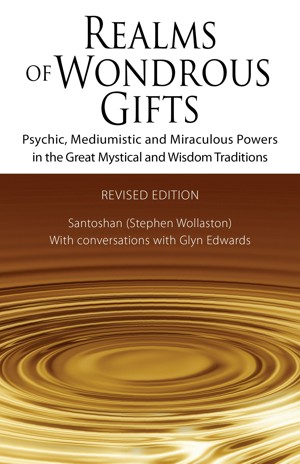 This is a thoroughly revised edition of the new low-cost paperback version that includes extra information, images, and two extensive appendices of questions and answers with the internationally renowned medium and former Benedictine monk Glyn Edwards, in which he eloquently reflected upon numerous interwoven facets of unfoldment. In all, a beneficial interfaith book that draws on both original sources and contemporary understanding.

ENDORSEMENTS
“Thought-provoking, with in-depth research by Santoshan and shared personal experience from Glyn Edwards. Realms of Wondrous Gifts draws upon ancient and modern teachings from various wisdom traditions and important sources. It is a book that will be of tremendous help to all who wish to deepen their understanding of the powers and the wider implications of spirituality.”
~ SWAMI DHARMANANDA SARASWATI, yoga teacher and author.

“Written with both clarity and insight, this is a rare and enriching book which integrates the wisdom of many spiritual traditions. Whilst illuminating the need now more than ever before to explore interspirituality, our universal commonality and deeper spiritual nature, it shows the way forward for embracing the Whole.” ~ EILEEN DAVIES, international medium and teacher.

“Realms of Wondrous Gifts often sees compassion as one of the highest gifts we can manifest. This important insight along with well-researched chapters and good writing makes the book thoroughly worthwhile reading for any spiritual seeker.”
~ IAN MOWLL, interfaith minister and co-editor of GreenSpirit magazine.

Stephen Wollaston is a OneSpirit Interfaith Foundation minister and was given the name Santoshan (contentment) by an English swami. He holds a degree in religious studies and a postgraduate certificate in religious education from King’s College London. He has also studied typographic design and transpersonal psychology and is currently training on a BACP accredited psychosynthesis course. In the late 70s he was the principal bass guitarist of one of London’s first punk rock bands, The Wasps. He has taught world religions and other humanities subjects, English language and academic writing at various educational establishments in the UK and at a medical university in the Middle East.

He has been a trustee of the UK charity GreenSpirit for many years, a member of its publications teams, the main typographic designer of GreenSpirit magazine and the GreenSpirit Book Series, and edited and written titles in the series. He is an author, coauthor and editor of more than a dozen books, including 'Spirituality Unveiled: Awakening to Creative Life' (Earth Books paperback and mid-price Smashwords eBook), 'River of Green Wisdom: Exploring Christian and Yogic Earth Centred Spirituality' (low-cost GreenSpirit paperback and Smashwords eBook), and 'Realms of Wondrous Gifts: Psychic, Mediumistic and Miraculous Powers in the Great Mystical and Wisdom Traditions' (revised low-cost paperback and Smashwords eBook). In 2001 an anthology of his articles was released: 'From Punk Rock to Green Spirituality'.

He was also a close friend of the late renowned UK medium and former Benedictine monk Glyn Edwards for 26 years, coauthored two books with him, edited two anthologies of his teachings, and compiled a tribute book about him.

See Smashwords for further details about Santoshan's eBooks, including titles done for the GreenSpirit Book Series.

Wonderful, inspirational teaching from both Santoshan and Glyn Edwards. Glyn's style of teaching is always to encourage and inspire one to find the best within ones own self. Truly worth reading and then keeping close to you, so you can 'dip' into it again and again.

You have subscribed to alerts for Santoshan (Stephen Wollaston).

You have been added to Santoshan (Stephen Wollaston)'s favorite list.

You can also sign-up to receive email notifications whenever Santoshan (Stephen Wollaston) releases a new book.