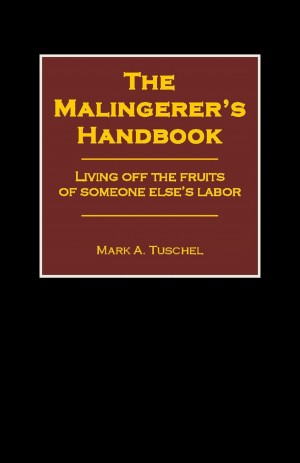 The Malingerer's Handbook - Living Off the Fruits of Someone Else's Labor

By Mark Tuschel
A humorous view of living the lifestyle that you deserve. Learn to work smart - not hard. This book is required reading for anyone who is starting a new job. It is also required reading for bosses, managers, parents, anyone who has people under their charge - to learn all about the tactics that are used against you. Disturbingly funny, but oh so real.

Mark A. Tuschel is a PhD – Previously heavy Drinker. Mark has over four years of sobriety without a relapse. He is not a prohibition lunatic; he openly admits he misses his old friend alcohol. He realizes that his drunken lifestyle was completely his own choice and drinking will not improve his life or his chances for a better future. Accepting this precept is why he chooses to remain sober.

Mark has been involved in radio broadcast for over 20 years. Starting as an on-air DJ in Milwaukee, WI. then producing comedy for All-Star Radio, ACN, ESPN Radio, Animal Radio Network and more. He currently performs cartoon character voice work from his home studio. He is also the founder and author of the website www.FreeDivorceSupportForMen.com

You have subscribed to alerts for Mark Tuschel.

You have been added to Mark Tuschel's favorite list.

You can also sign-up to receive email notifications whenever Mark Tuschel releases a new book.