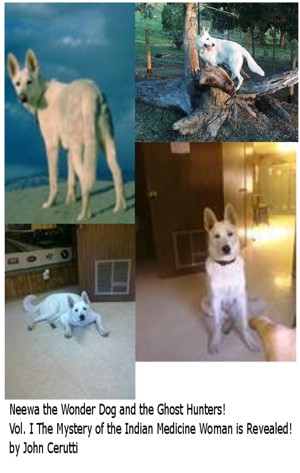 Neewa the Wonder Dog and the Ghost Hunters

By John Cerutti
Volume One: The Indian Medicine Woman’s Mystery is Revealed!

Adventure and mystery in the uncanny spirit world captivate the young lives of fourteen-year-old Christina and her sister Jackie, eleven. When the family moves 1500 miles from their home in New Jersey to the desert of the American Southwest, they encounter many spirits—some good, some evil. More
Out West the family seeks out the paranormal, hunting ghosts with the latest, most sophisticated devices. Their searches take them to several eerie places, including a remote forest, a ghost town and a sacred burial ground. They also explore an isolated Native American stream and investigate an Indian Pow Wow.
Not long after settling into their new home, Christina adopts Neewa, a half coyote female puppy with a mysterious secret. But when the puppy becomes deathly ill, the girl is determined to find a doctor to save her pet. When a shaman vet miraculously turns up, he supplies a charm, a potion and an incantation for Neewa to save her spirit.
Danger lurks around every corner but the sisters surprisingly find protection in most unusual ways through a medicine woman, mythological animals, herbs and other mystical means.
Throughout their extraordinary experiences the young sisters face various dimensions of fear and joy.
Download: epub mobi (Kindle) pdf more Online Reader
rtf lrf pdb txt
Price: Free! USD
Add to Library
Create Widget
Tags: adventure mystery shaman paranormal teens sisters terror evil cowboy spirit world ghost town mysticism coyote american indian mythological exorcism evp puppy potion orbs incantation pow wow medicine woman burial ground
About John Cerutti

You have subscribed to Smashwords Alerts new release notifications for John Cerutti.

You have been added to John Cerutti's favorite list.

You can also sign-up to receive email notifications whenever John Cerutti releases a new book.