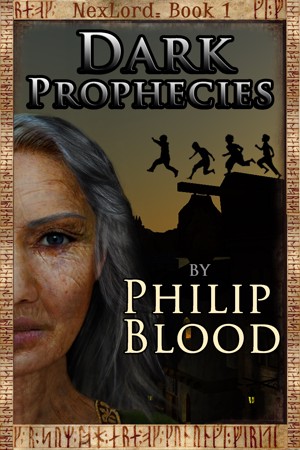 Philip Blood is a published author currently living in the Los Angeles suburbs. He is an avid scuba diver, a voracious reader of sci-fi and fantasy, a tabletop gamer from way back and a computer game junkie with MMOs being the top of his list.

Mr. Blood recently finished a sequel to zONE: The End and the Beginning, this one is called Pirate Code. He has just finished publishing book eight in his urban fantasy series, The Archimage Wars: Magnus of Nibiru. Book 1 through 8 are all available with two more to come in that series. Currently, Mr. Blood is finishing up the third and final book in his zONE trilogy, this one called, Brethren of the Arc. In addition, he works on creating Audio Plays for his novels, with five already available and more to come!

He has also gone back to his very first fantasy epic series, Cathexis, and is doing a deep re-write, fixing may of the writing issues of a young author (he wrote it 30 years ago) while leaving the story intact. Books 1 and 2 have already been re-written, with the other two novels in the series to follow as time permits between writing new novels.

Finally, Mr. Blood has begun outlining a new, more traditional, fantasy epic, which he will start writing in the near future. The series is called, Kingdoms of Magic.

Four children foretold in two Prophecies must learn how to survive the coming darkness, and take on an evil power that wants to consume the world.

A buddy of mine recommended this series, and I'm glad he did! What a wonderful story. The characters are great, the action flows quickly, and what a twist at the end! Can't wait to read book two. Also note, I read the other review here, and I did not notice many editing issues in this book. I went to check the date of publication, and noticed that this is a second edition. Looks like it has been edited since that review. If I was going to criticize anything, it would be the stress on friendship, but since this turned out to be the basis of the unique magic system, all is forgiven. Five Stars, it's that good.

(reviewed the day of purchase)
karhleen woody reviewed on on May 14, 2013

I really enjoyed the characters and plot of this fantasy. I have ordered the next book in the series because, of course, I want to know the ending to the story. The only problem I had with the book is that it is very poorly edited. I would like to offer my services to the author to edit his books. There were so many mistakes!! Luckily, it didn't detract from the story. I recommend this book to anyone that likes fantasy.

You have subscribed to alerts for Philip Blood.

You have been added to Philip Blood's favorite list.

You can also sign-up to receive email notifications whenever Philip Blood releases a new book.