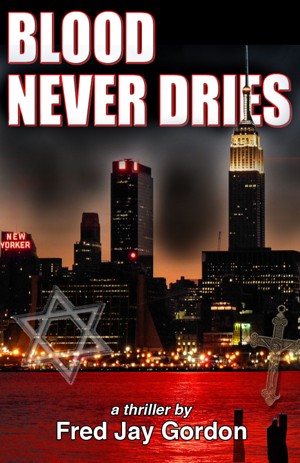 By Fred Jay Gordon
Haunted by his near-death experience, Max Star is being hunted. He believes religions cause war but Max's faith is in love, not ideology. Threatened by some of the religious Orthodox, Max wakes up with a naked dead woman in his bed on the day he is scheduled to hold his biggest rally ever for his new Compassionate Judaism movement. Somebody wants Max dead and Max is desperate to understand why. More
Haunted by his near-death experience in a violent car crash, Max Star is being hunted by people he doesn't know. Believing religions cause war even though God is good, Max drops out of graduate school and struggles to bring his new Compassionate Judaism movement to as many people as possible. But Max's faith in love, not ideology, threatens some of the religious Orthodox in New York and Israel.
On a hot day in July, Max, charismatic and telegenic, wakes up in his hotel room with a naked, dead woman in his bed. That night he is scheduled to hold his biggest rally in the huge hall of that same New York City hotel. But a few hours later while being interviewed on a national morning television show, Max is overwhelmed by his internal struggles which consume him with guilt and fear. Live on camera, believing he may have killed that unknown woman in his bed, Max faints which causes an immediate, viral sensation leaping Max into a feverish media explosion and his event is sold out.
BLOOD NEVER DRIES races toward the climactic evening rally as Max attempts to understand the parts of his life which brought him to this confrontation. But with his enemies coming closer, he and his wife and his family become more and more unnerved. Max is desperate to understand the consequences of his dreams but most of all, he must discover who wants him stopped.
Available ebook formats: epub mobi pdf rtf lrf pdb txt html
First 10% Sample: epub mobi (Kindle) lrf more Online Reader
pdb
Price: $1.99 USD
Buy Add to Library Give as a Gift
How gifting works
Create Widget
Tags: thriller literary new york city action romance christian action adventures contemporay orthodox jews americana fiction
About Fred Jay Gordon

FRED JAY GORDON was born in the Bronx and lives in New York. He owned Pegasus, a red, 17-hand high ex-race horse he rode bareback and taught to jump five foot high fences. When Gordon was 16, he wrote and recorded a pop song, "Bye, Bye, She Cried," which was bought by Atlantic Records. He's swept warehouse floors and worked the delivery trucks for the Budweiser beer factory in Newark, NJ. He has a degree in English from UC Berkeley and received a scholarship from Columbia University in Film. At NBC Studios in New York, he worked as a Tour Guide and, on Broadway, he helped cast and raise money for two smash hit musicals and then worked as a salad boy and a waiter. His plays have been produced in NY, LA, Baltimore, etc, he's a member of the Ensemble Studio Theater, he's taught playwriting and English Literature as well as horse-back riding, appeared as a contestant on various tv game shows to pay the rent, worked the streets of Brooklyn as a city social worker, and done the graveyard shift in the Tombs in the prisons of downtown NYC. He’s a PEN Award winner and was a resident writer at the Edward Albee Foundation in Montauk, NY. He has written, AN AMERICAN FABLE, about the American dream of overnight success, and his newest book is the thriller, BLOOD NEVER DRIES.

Reviews of BENJAMIN GRABBED HIS GLICKEN AND RAN:

from Library Journal: "One hopes BENJAMIN won't be dismissed as just another offbeat experimental novel. It is an exciting book!"

from Publishers Weekly: "...Benjamin's personal story is wild, with an extraordinary made-up language and a pun-on-pun series of sentences... The novel builds to a strong, dramatic climax and the effect is chilling."

from The Christian Science Monitor: "Like a child of Zeus sprung full grown from the head of their creator ... this novel has not received the attention it deserves... The novel is operating simultaneously on three planes and finally on a fourth. Benjamin as a character is oddly captivating ... virtuosic ... exacting descriptions of Benjamin's room, physical sensations, and emotions are like a zoom lens bringing one in intensely close to him. Benjamin says of his Mysteries: 'Words are only a small portion of my life... They are weak technicalities which fail... Words are only words. And besides, I lie a lot.'

You have subscribed to alerts for Fred Jay Gordon.

You have been added to Fred Jay Gordon's favorite list.

You can also sign-up to receive email notifications whenever Fred Jay Gordon releases a new book.