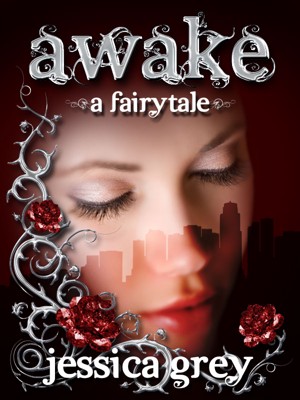 By Jessica Grey
Rated 5.00/5 based on 1 reviews
Magic spells and enchanted beds are the last things on Alex Martin's mind when she sees Luke Reed on the first day of her summer internship. But when they find a real Sleeping Beauty they discover the truth hidden in fairytales and that a fae's ancient evil still holds power. Can Alex and her friends defeat the curse and finally realize it takes more than true love's kiss to bring you fully Awake? More
Alexandra Martin didn’t believe in fairytales…

Alex has always been more interested in rocks and science than stories about princesses and magic. Now she’s far too busy with her summer internship at the Gem and Mineral Museum to think about children’s stories. Between avoiding her former best friend and high school baseball star, Luke Reed, and trying to hide her unrequited crush on her mentor at the museum, the real world is occupying all of her time.

…Until she walked into one.

It turns out fairytales aren’t all fun and games. A curse has turned her neat and orderly world upside down, and to break it, she bands together with a fellow intern and a recently awakened princess who’s been asleep for 900 years. Can this trio of unlikely heroines put an end to an ominous enchantment, discover true love, and keep an ancient and evil magic from being unleashed on modern-day Los Angeles?

Jessica Grey is an author, fairytale believer, baseball lover, and recovering Star Wars fangirl. A life-long Californian, she now lives in Montana with her husband and two children where she spends her time writing, perfecting the fine art of toddler-wrangling, and drinking way too much caffeine.

It’s the last summer before college, and Alex Martin is looking forward to spending it… in a museum. No, she’s not a normal 18 year old, but she and her best friend Becca Ward have interned at LA’s Gem and Mineral Museum every summer. This year however provides one crucial difference—her childhood friend, Luke Reed, has joined the geeky rock squad.

Alex and Luke haven’t really talked since their freshman year of high school, when Luke’s status as a baseball star put him on a different social level than Alex. She is none too pleased by the thought of sharing her favorite place with him, especially since she was kind of hoping to catch the eye of their advisor, the dreamy Nicholas Hunt.

But when Alex finds Luke lying on an enchanted bed, trapped in a magical slumber, suddenly all her summer plans are out the window. She and Becca are joined by Lilia, a 12th century princess who’s been asleep for 850 years. Yes, Luke tried to wake up Sleeping Beauty with a kiss, but instead, he simply took her place.

Now the three girls have to figure out exactly what the spell is, who cast it, and how they can save Luke from the evil fairy behind it all. To do that, Alex and Becca will have to come to terms with the fact that magic actually exists, and accept their own ability to use it.

Awake is a phenomenal story. It takes all the familiar elements of Sleeping Beauty and twists them into something that is both recognizable and new at the same time. The dialogue between the three girls sparkled, and the relationship between Alex and Luke was romantic and real.

The magic scenes were my favorite parts of the story. Jessica Grey invented an entire system of magic for her book, and it is brilliant and consistent. Even though I know diamonds and precious metal have no magical qualities, I could easily believe Alex and Becca were able to work spells with them.

I read Awake in one day, which is not something I often do anymore. My brain usually starts to wander after about five chapters, and I’ll switch to another book or a movie. This time though I was too eager to find out how it all turned out in the end to put it down.

Grey’s style is smooth and easy to follow. Her characters are real, and her story is delightful. I can’t wait to read the next book in this trilogy.

You have subscribed to alerts for Jessica Grey.

You have been added to Jessica Grey's favorite list.

You can also sign-up to receive email notifications whenever Jessica Grey releases a new book.