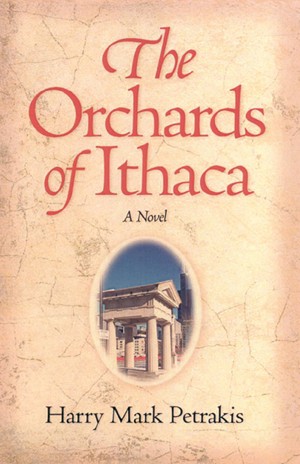 The Orchards of Ithaca

Friend and host to the pantheon of Chicago political and sports celebrities, from Ditka to Daley, Jordan to Kup, Orestes is a respected member of his Halsted Street neighborhood. Unbeknownst to his peers, he privately wars with the consequences of a near-fatal childhood illness and the insecurities foisted upon him by his late, brutal father. Orestes finds security and comfort in his twenty-three-year marriage to the loving Dessie, without knowing that she harbors stark secrets of her own. Oblivious to these unvoiced burdens of their parents are the Panos children: a son forced into a hasty wedlock when he impregnated a mafioso's daughter, and a teenage daughter who seeks salvation in designer fashions. Orestes must also endure the barbs of his shrewish mother-in-law, an avid Tom Selleck admirer who openly scorns her son-in-law for lacking the machismo of her screen idol.

As Y2K, Oval Office infidelity, the casualties of Columbine, and millennium fever loom over them, the Greek Town community is not without its own disruptions. When his parish priest is accused of child molestation, Orestes becomes the young cleric's orator and advocate in the court of public opinion. He also must contend with a young, golden-haired temptress who seeks to draw him into her fantasy of a dead poet and his muse. But these crises of faith and fealty pale in the face of the contest of character arising when family tragedy sparks confession in the Panos household, forcing Orestes and Dessie to reveal long-concealed truths that threaten their sacred union.

Harry Mark Petrakis is the author of twenty-three books, short-stories, and essays, and has been nominated twice for the National Book Award. His books include the 'A Dream of Kings' (1966), set in Chicago, which was a New York Times bestseller. It was published in twelve foreign editions and was made into a motion picture (1969) starring Anthony Quinn. He has won the O. Henry Award, and received awards from Friends of American Writers, Friends of Literature, and the Society of Midland Authors. He was the Nikos Kazantzakis Chair in Modern Greek Studies at San Francisco State University and the McGuffy Visiting Lecturer at Ohio University. In 2004, the American College of Greece in Athens presented him with an Honorary Doctor of Humane Letters Degree.

Reviews of The Orchards of Ithaca by Harry Mark Petrakis

You have subscribed to alerts for Harry Mark Petrakis.

You have been added to Harry Mark Petrakis's favorite list.

You can also sign-up to receive email notifications whenever Harry Mark Petrakis releases a new book.