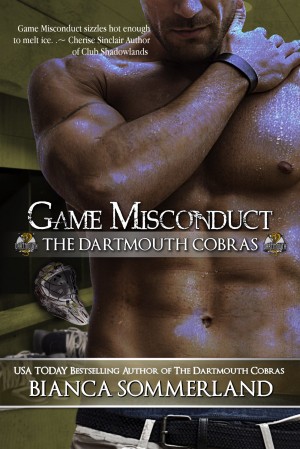 Rated 3.75/5 based on 4 reviews
Oriana Delgado's father owns the Dartmouth Cobra's, but he doesn't own her. When he treats her future like just another play, she changes the rules and picks her own lineup. But the intended deke turns into the real thing. And the game can't be won in one lusty night. More
The game has always cast a shadow over Oriana Delgado's life. She should hate the game. But she doesn't. The passion and the energy of the sport is part of her. But so is the urge to drop the role of the Dartmouth Cobra owner's 'good daughter' and find a less...conventional one.

Playmaker, Max Perron, never expected a woman to accept him and his twisted desires. Oriana came close, but he wasn't surprised when she walked away. A girl like her needs normal. Which he can't give her. He's too much of a team player, and not just on the ice.

But then Oriana's father goes too far in trying to control her and she decides to use exposure as blackmail. Just the implication of her spending the night with the Cobra's finest should get her father to back off.

Turns out a team player is exactly what she needs.

Tell you about me? Hmm, well there's not much to say. I love hockey and cars and my kids…not in that order of course! Lol! When I'm not writing—which isn't often—I'm usually watching a game or a car show while working on promo. Going out with my kids is my only down time. I get to clear my head and forget everything.

As for when and why I first started writing, I guess I thought I'd get extra cookies if I was quiet for awhile—that's how young I was. I used to bring my grandmother barely legible pages filled with tales of evil unicorns. She told me then that I would be a famous author.

I hope one day to prove her right.

My work tends to lean towards the dark side. My most popular book, Deadly Captive, tends to trigger extreme reactions in people and I often advise that if you're going to read my work, start with one of my other books and ease your way up to that…if you think you can deal with the subject matter. Most reviews for the book mention (quote from Dark Diva Reviews-Read full review here: http://www.darkdivasreviews.com/?p=5508 ) `I just have to start by saying that this book is not for the faint of heart or the easily offended.' And (quote from Kinky Book Reviews-Read full review here: http://kinkybookreviews.com/review-deadly-captive-by-bianca-sommerland/ ) `If you are not prepared for this book, do NOT read it.' Seriously, read the excerpts and consider the warnings.

To find out more about me, either swing by my website: www.im-no-angel.com or simply ask here! I'll try to answer all the questions I can while I'm here, but you can always email me: biancasommerland (at) gmail (dot) com

Also in Series: The Dartmouth Cobras

Oriana Delgado is the daughter of the Dartmouth Cobra's hockey team owner. She's been placed in the "good daughter" box and is trying to stay there, but she's miserable with her current boring, unsatisfying relationship with the team's coach and is becoming fed up with his frequent degradation. She's seriously attracted to Max, but she can't offer what Max needs. When she's betrayed by those she trusts most, she decides she needs to start playing dirty if she hopes to get what she wants.

Max Perron is one of the Cobra's strongest playmakers. He's carrying a torch for Oriana, but knows she wouldn't ever understand or accept his sexual preferences. He's a group participant and voyeur. He's willing to try to change for her, but she doesn't believe he should have to change for anyone.

Oriana's been wronged by those she trusted most; her father only cares about his team and keeping Paul happy. Paul, in turn, is only concerned with keeping his business partners (and himself) happy. Paul likes to humiliate, degrade & threaten Oriana in a public forum and she's finally had enough. When she threatens to leave Paul, her father threatens to completely cut her off. But she knows she has to break free.

I think I'd have to say that this story was 60% sex content & 40% meaningful plot. The characters were actually very well written and described, they were very likable (except, of course, Paul and Mr. Delgado). The plot was a little thin, but the concept behind it was good. The conflicts were strong but it felt that there wasn't satisfactory closure... I'd like to see if that closure occurs in book 2 (DEFENSIVE ZONE).

A good book. I am going to read the rest of the series.

(review of free book)
Doris Holmes reviewed on Nov. 29, 2012
(no rating)
A young woman who wants her father's attention gets it any way she can. No stars

Terrific story and awesome sex scenes. Great intertwined stories. And it was FREE.

You have subscribed to alerts for Bianca Sommerland.

You have been added to Bianca Sommerland's favorite list.

You can also sign-up to receive email notifications whenever Bianca Sommerland releases a new book.