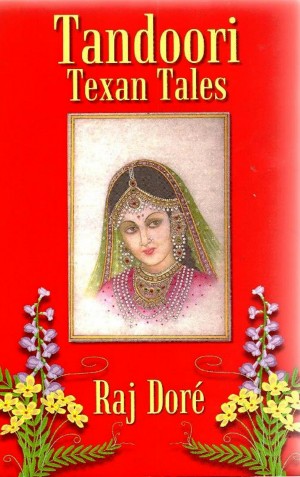 By Raj Dore
These six tales are filled with humor, passion, joys, sorrows and the whole gamut of human emotions that one encounters when two cultures meet. Whether you are from the Indian sub-continent or not, you will empathize with the characters. Having picked it up you will not put the book down until you have read it from cover to cover. More
Some Excerpts from the Book:

The First Class was very sparsely occupied, just two or three people in all those 20 odd seats. I spotted one face that struck my solar plexus like a ton of bricks. She was wearing Salvar-kameez and had covered a good portion of her head with the Dupatta. She pretended to be engrossed in a book, quite oblivious of the surroundings. The setting sun shone through the window on her side. She was wearing very large sunglasses that covered almost one-third of her face. Very obviously, she valued her privacy very dearly and did not want to be recognized. Even then, it struck me that she seemed very familiar, as if I might have met her some where, some time. But I just could not place a label on that face. I kept walking and came back to my seat.

The sun had set after a while. The lights had been dimmed. Only some soft lights at the aisle were kept on. Some passengers had turned on their reading lights. I stood up and walked toward the First Class cabin once again, wanting to take another look at this mysterious passenger. The reading light illuminated her face partially; it was still buried in the book. Only then slowly, it all came back to me.

I heard a gentle knock on the intermediate door. She had seen the news on her TV as well. She was flushed pink and visibly shaken. She was in tears. She pleaded if she could come in, as she was scared and shocked beyond belief. I let her come in. We were both still in the same clothes we had been in all day.

We sat on the bed resting our backs on the pillow and headboard. We were watching the breaking news, clasping our hands with horror in our eyes. I could feel that she wanted to clasp me and hold me close. But I was just too confused and emotionally broken myself to make any kind of physical response to her overtures...........................................

She asked if she could leave the intermediate door open. I readily agreed. As she went into her room she turned and told me over her shoulder to give her a wake up call at 5:30, if she was not already awake.

I could see that her bathroom door was also half-ajar. I could see her full image reflected on the large mirror at the sink. She was probably unaware of that or she might have purposely wanted it that way.

She took her Dupatta and hung it on the peg at the opposite wall. Then she slowly removed the hooks on the back of her Kameez one by one and slowly slid it over her head. Turned around and hung that also on the peg....................................... One by one everything came off and she disrobed completely. Her ivory complexion and smooth skin made her look like Neptune under moonlight.

She pulled out a brush from her handbag, stroked her dark brown hair a few times. She took out an elastic band and bound her hair into a ponytail. Then she splashed her face with cold running water. Rubbed some soap all over to remove the makeup. She rinsed her face finally and covered it with fresh laundered hand towel from the rack. Her clean spotless natural skin without any makeup shone looking even prettier.

Then she pulled out a brown paper package from the handbag and removed a T-shirt. She pulled it over her head and let it fall all the way down to her ankles. It was a top-to-toe large T-shirt with "Welcome to Arkansas" written on the back with a picture of a sunrise behind Ozark Mountains in the front. Obviously this was the piece of article that had started the whole rigmarole that evening. Or should I say it was the cause of our survival today. I heard her switch off the light and get into her bed...........................................
Download: epub mobi (Kindle) pdf more Online Reader
rtf lrf pdb txt
Price: Free! USD
Add to Library
Create Widget
Tags: travel family drama history short stories romantic india
About Raj Dore

Raj Dore is a Software Engineer hailing from a very orthodox South-Indian Brahmin family. He was born in Hyderabad (Sind), now in Pakistan, before the Partition. When the Indian sub-continent was divided, he and his family fled to India. He migrated to the United States in 1977. He now lives with his wife Sumita in Dallas, Texas.

He is a member of MENSA and INTERTEL, the high-IQ societies. His writings have been published in their magazines as well.

He has traveled widely in Europe, South America and Asia. He knows English, Hindi, Tamil and German.

You have subscribed to alerts for Raj Dore.

You have been added to Raj Dore's favorite list.

You can also sign-up to receive email notifications whenever Raj Dore releases a new book.