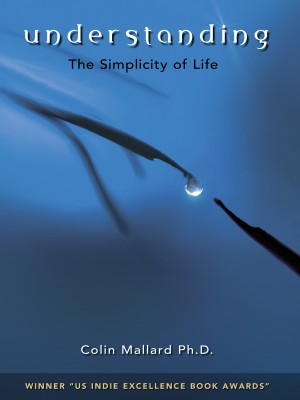 Understanding, the Simplicity of Life

By Colin Mallard
Rated 5.00/5 based on 4 reviews
UNDERSTANDING is a logical approach to understanding human nature and the world in which we live. It addresses issues of belief, truth, impersonal and personal awareness, and free will. The book is alive with anecdotes, teaching stories and metaphors, which make difficult or unfamiliar concepts easily understandable.An invaluable book for the spiritual seeker interested in enlightenment and peace. More
UNDERSTANDING To demonstrate the effect of understanding Colin uses the following example: When the European mariners understood that the world was not flat, their behavior changed simply as a result of their understanding. Despite their fear they sailed beyond the horizon and not one of them fell over the edge.

Understanding, real understanding, brings the gift of living in the moment. As anyone can attest from personal experience, the mental states of past and future lack the immediacy and vibrancy of the present moment. When the human being is present to events taking place and not caught in the chatter of the mind, life is experienced fully, regardless of what is happening. The result is a greater sense of peace and harmony and the ability to act spontaneously and appropriately to the changes in life.
Download: epub mobi (Kindle) pdf more Online Reader
lrf pdb txt
Price: Free! USD
Add to Library
Create Widget
Tags: spiritual awakening wisdom truth enlightenment sufism zen advaita taoism nonduality peace within spiritual awareness advaita vedanta jnanna yoga
About Colin Mallard

Colin Mallard played in bomb craters and bombed out buildings as a child in England during the Second World War. Perhaps this was the origin of his interest in peace. He attended University in Boston and was deeply involved in the Civil Rights and Anti War Movements of the 60s. In fact, the story of the sanctuary at Boston University’s Marsh Chapel, described in Stillpoint, was written from personal experience.

He worked for a number of years at an inner city church in Providence with the local black population and was harassed, threatened and beaten by the police. Later the church was firebombed and destroyed. (Click on the link below and see some interesting photos from that time. He’s the one with the large mustache.)

Some of his many jobs have included such esoteric skills as taxi driver, magician’s assistant, tree planter, mountain guide and a street counselor on Vancouver’s skid-road. Colin laughs, “Jack of all trades and master of none.”

He spent eleven years as a Unitarian minister. His interest in exploring spiritual matters took him into the ministry and out of it again.

For the next 20 years he worked as a psychologist. For some of that time he lived in Hawaii and worked with families in which children had been abused. The State of Hawaii believed the family was the best place to raise children and were prepared to provide the needed help. He taught parents effective communication and parenting kills, and helped them understand the sources of anger and conflict. It was during this time he wrote a first novel, a teaching story for his clients.

Behind it all was a consuming interest in the nature of peace and who or what we are as human beings. This led him to a lengthy study of Taoism, and Zen and, latterly, the Advaita Masters, Ramesh Balsekar and Dr. Jean Klein.

He has written a number of books on the subject of peace. Something to Ponder, reflections from Lao Tzu’s Tao Te Ching, and Understanding, draw the reader into a deep exploration of life and how it works. A number of his books have won awards in such categories as Eastern Religion, General Fiction and Interior Design and Layout.

His latest novel Stillpoint uses fictional characters to bring to life the events that took place before, during and after the creation of the State of Israel. “If there is no awareness of what took place and what continues to this day, how can there be any real understanding?” Colin asks. “With deep understanding,” he continues, “shifts in behavior spontaneously take place and peace becomes a possibility.”

“Beliefs are not facts” he points out, “We may believe we can fly but gravity doesn’t care what we believe.”

Colin lives on Vancouver Island, where he writes and teaches about the wisdom and insights of Eastern Philosophy. He is also an avid soccer player and photographer. 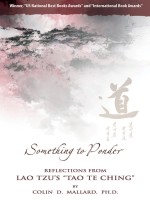 For someone ordinary like me, Colin Mallard's book "Understanding" has been a terrific help in leaping across my huge gap of "not knowing". It has given me the perfect starting point from which to explore my understanding of, and perhaps come to know, the real truths and essence of life.
Colin's shares his "knowing" without reservation and in a very comfortable way using stories from his own life as well as those of respected ancient sages and masters from around the world. All in simple, plain, just you and me folks language.
"Understanding" points to the way... I recommend it as a safe warm understandable way to start the search for deeper personal inner peace and harmony.

Understanding helped to point me in the direction I was ready to go in; helpful considering I didn’t know what that direction was at the time! Colin's succinct descriptions, stories and anecdotes clarified concepts for me and have brought me to a greater understanding of the self. I now spend more time as a spectator to my story than as an unwitting follower.

(reviewed 22 days after purchase)
Jennifer Molavi reviewed on May 10, 2012

Colin’s book is a clear, concise and uncomplicated presentation of the core ideas of Advaita Vedanta. Over the years I have read many self-help books, and books that explain various ideologies. Colin’s is the first book that didn’t ramble on and on, repeating the same thing over and over again with a car salesman’s fervor filling up space by promising content but only making something simple into something that sounds difficult. «Understanding» is a book that makes something complex into something simple. The ideas are universal, personal, and intimate. They connect the physical being and the spiritual world in a way that makes perfect sense. There is no unnecessary convincing, merely simple explanations that not only makes sense, but which are well reflected in the theories and concepts of psychology and physiology. I recognized the similarities and think that this philosophy provides a great framework for dealing with life and being able to recognize what is happening to us, so that we can work towards inner peace and acceptance of what is. A highly readable book. Each chapter begins with a serene illustration that is symbolic of the content overlain with a quote from the wisdom of Lao Tzu and others. Reading it was a balm. I never felt in a hurry to “get to the point” as each chapter was a point, an “ah ha” that sat quietly and comfortably where it belonged and provided a recognition of innate knowledge put into words.

(reviewed the day of purchase)
Val Walton reviewed on May 7, 2012

The paths to Enlightenment are many and complicated. Words are only pointers and can often mislead as concepts and ideas are not the truth either. As a result trying to understand can be very frustrating. This books lays out a path very clearly. Words used are defined with great precision and metaphors and stories help to illustrate the ideas. Colin uses stories from Zen and Sufi as well as from his own experiences as a seeker to show the practical effects of the ideas. Although the ideas are very abstract Colin is able to capture what is needed before understanding takes place. The ideas of Advaita, Taoism and Zen can seem so complicated that words slip away and there is a tendency to try to grasp them. Colin has the ability to hold the words steady so they can be thought about and discussed. When understanding comes, even only at an intellectual level, words aren’t necessary any more.

Colin points out how simple it can be. We don’t have to go looking for enlightenment: for our impersonal consciousness. It’s already there- within us. We are so busy chasing down the road looking for signs that we miss the fact that it is right here. It was here when we were born and we just lost sight of it as we absorbed the conditioning of our culture.

You have subscribed to alerts for Colin Mallard.

You have been added to Colin Mallard's favorite list.

You can also sign-up to receive email notifications whenever Colin Mallard releases a new book.