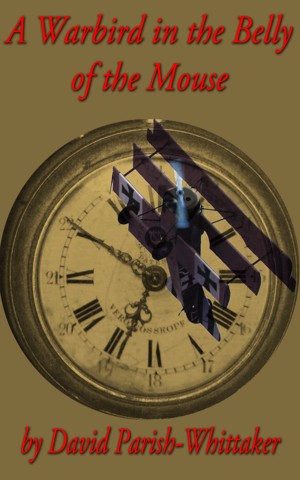 A Warbird in the Belly of the Mouse

"A nice tale about pride, honor and duty." --Diabolical Plots

David Parish-Whittaker is a winner of the Writers of the Future competition for emerging talent in speculative fiction, for his story A Warbird in the Belly of the Mouse

Upcoming works include Leviathans of the Skies co-authored with Steven Savile, to be released by Untreed Reads in 2013 as part of the steampunk series Space 1889. He is on the writing team for the game Dragon Assault by Symbiant Studios.

A graduate of the Pixelyard School of Art for game design, he writes videogame reviews and analysis for Bag of Games and Geekosophy.

By day, he pays for his dog's kibble as an airline captain. In previous incarnations he has been a traffic watch pilot, aerobatic instructor and Naval Flight Officer.

A rare, good military science fiction short story. Well-written by someone who loves flying. Involves a veteran military aviator in time of war, tired of performing in a "reality show".

You have subscribed to alerts for David Parish-Whittaker.

You have been added to David Parish-Whittaker's favorite list.

You can also sign-up to receive email notifications whenever David Parish-Whittaker releases a new book.