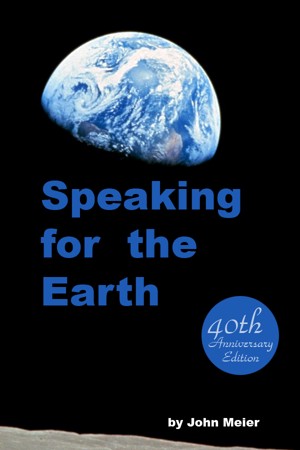 By John Meier
50% of all author proceeds from this book are donated to environmental causes.

Written in 1970 for the 1st Earth Day, it is re-released now for the 40th Anniversary of Earth Day as Meier finds it of the up most importance for the environmental movement today to look back at what has/hasn't yet been done

Mr. Meier has been an internationally known businessman, financial consultant and environmentalist for over 50 years, and has been extensively involved in international consulting and banking since 1960. A former Governor of the Bank of the South Pacific, Mr. Meier is also recognized for his tailor-made management expertise he offers international business clients.

In addition to serving as personal advisor to US industrialist Howard R. Hughes, he served on President Richard Nixon’s Task Force on Resources and Environment, and has received numerous awards throughout the world for his contributions. These include the covenant Christopher Columbus award for Merit in Scientific and Ecological Studies, a citation from Governor Luis A Ferre of Puerto Rico for his “extraordinary assistance” to Puerto Rico, and an award from Mayor Sam Yorty and the city of Los Angeles for his work in the field of ecology. He has written “Speaking for the Earth”, a best selling book on the environment.

Mr. Meier has been a candidate for the US Senate, and advisor to several US Senators including Senators Hubert Humphrey and Robert F. Kennedy. He has consulted to Heads of State, including President Joaquin Balaguer of the Dominican Republic. He has also had managerial and executive positions with the New York Life Insurance Co., Remington Rand Univac, Hughes Aircraft Co., Hughes Tool Co., has served as Chairman of Satellite Geophysics Ltd., and was President of the Nevada Environmental Foundation.

Mr. Meier served on Nevada’s gaming Industry Task Force, has been VP of the Nevada Taxpayers Association, and was a Special Assistant to Governor Paul Laxalt. He has also served as a Director for the International Eye Foundation, and was a member of the Board of Advisors for the New York Manhattan Tribune Newspaper.

In 1966, Mr. Meier earned the Aerospace Man of the Year Award for the application of computer systems in understanding industrial and institutional problems. While serving as an aide to Howard Hughes, he was awarded an outstanding young Man of the Year Award in the United States, and the California Governor’s Award of Technical Achievement in Data Processing. In a ceremony at the Washington DC National Press Club, he was knighted in the Sovereign Greek Order of St. Dennis of Zante. Of his many other awards, Mr. Meier was also honored by the Counsel General of China for his outstanding leadership in the business community. As a Financier and Merchant Banker, Mr. Meier has been responsible or the funding of numerous international corporations. These include high technology companies, health companies, an international bank, a motion picture company, and real estate development projects.

A former American Legion Chaplain and US Army Veteran of the Korean conflict, Mr. Meier has also served in the US Marine Corps Reserve. He received his Canadian Citizenship in 1977.

You have subscribed to alerts for John Meier.

You have been added to John Meier's favorite list.

You can also sign-up to receive email notifications whenever John Meier releases a new book.