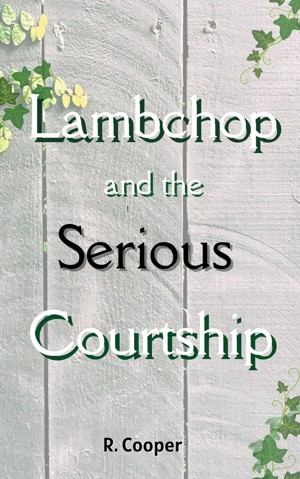 Lambchop and the Serious Courtship

Rated 4.00/5 based on 1 review
Nicodemus’ problem was that he had nothing to make anyone wish to court him. Nicodemus’ other problem was the scandalous alpha next door. Bel was nothing an omega Nicodemus should want, and would be the first to say so. But with Nicodemus’ first heat approaching, and his few, respectable suitors growing impatient, it’s Bel on Nicodemus’ mind. More
Lonely omega Nicodemus is approaching his first heat. A lowly and somewhat plain housekeeper in a small, uptight town, he is facing a long, bleak future alone or an even bleaker future with one of his few dull, disinterested suitors. The last thing he needs is the realization that he wants someone to want him as wildly as omegas are supposed to be wanted and wooed—and that he wants those things from his entirely scandalous alpha neighbor, Bel.

Bel has no interest in respectability or housekeeping, and therefore, no interest in Nicodemus. But there is something in Bel’s gaze and his shocking, sharp, conversation that draws Nicodemus again and again to the fence between their properties, where Bel waits for him. With only days to make a decision between unfulfilled desires or being stifled by an unhappy match, Nicodemus starts to wonder if it is even a courtship he wants, or if he’d rather seek out his ruin in the arms of a rakish alpha.
Available ebook formats: epub mobi pdf lrf pdb txt html
First 15% Sample: epub mobi (Kindle) lrf more Online Reader
pdb
You set the price! USD
Buy Add to Library Give as a Gift
How gifting works
Create Widget
Tags: fantasy historical romance historical fantasy courtship alpha omega alpha bad boy mating heat omega romance omega heat omega verse
About R. Cooper

I'm a somewhat absentminded, often distracted, writer of queer romance. I'm probably most known for the Being(s) in Love series and the occasional story about witches or firefighters in love. Also known as, "Ah, yes, the one with the dragons."

You can find me on in the usual places, or subscribe to my newsletter.

Reviews of Lambchop and the Serious Courtship by R. Cooper

This is a sweet little story. Ms Cooper is so good at writing about people who are marginalized in some way.

You have subscribed to Smashwords Alerts new release notifications for R. Cooper.

You have been added to R. Cooper's favorite list.

You can also sign-up to receive email notifications whenever R. Cooper releases a new book.