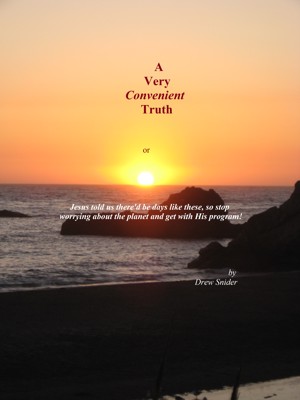 A Very Convenient Truth, Or Jesus Told Us There’d Be Days Like These, So Stop Worrying About The Planet And Get With His Program!

By Drew Snider
Do the world's events have you in a state of fear? Whether it's climate change, wars, poverty or COVID-19, it seems like fear-producing things are on all sides. The "solutions" people have come up with so far have come up short, and despair, confusion and depression have taken hold. A Very Convenient Truth shows a different approach - one guaranteed to succeed, all contained in an "old book". More
These days, there is a lot to be afraid of.

Currently (April 2020), the COVID-19 pandemic has people around the world afraid that the next person they see, talk to or stand within six feet of will give them a virus.

Wars, natural disasters and humanitarian crises are all around us.

Young people -- those born after 2000 -- are terrified of the effects of climate change -- in the USA, the one presidential candidate many thought was taking climate change seriously has dropped out of the race.

A Very Convenient Truth points you to a Source that has been around since before the beginning of time. The Bible predicted all these events would happen -- including the intensity with which they are happening today. That knowledge, on its own, would be cold comfort, but the Bible also provides something missing from today's discussions: HOPE.

There is hope in the long term -- that these events are just the prelude to Jesus Christ's return and that God will re-make the world into something unimaginably beautiful and glorious.

But there is short-term, more worldly hope, contained in this promise: "If My people, who are called by My name, will humble themselves and pray and seek My face and turn from their wicked ways, then I will hear from heaven and forgive their sins and will heal the land." (2 Chronicles 7:14)

In Jesus, we can ALL qualify as "God's People", so the promise is for all of us. A Very Convenient Truth explores God's plan -- and how we fit in.

Born in Vancouver, Canada, Drew's varied career has provided a goodly dose of adventure, although none so great as the time since he was called into Ministry. Drew graduated from Concordia University in Montreal with a degree in English, then spent a couple of years trying to hone his talents as a comedy writer and performer and found there were enough jobs to suggest a career was possible -- but not probable.
There followed 25 years in radio and TV as a newscaster, sportscaster, talk-show host and environmental features reporter and along the line, he got to know Jesus Christ.
Drew started hearing a call to ministry while living in Victoria, BC, in 2001 and after a series of &quot;it could only be God&quot; circumstances, he found himself drawn to a Mission on Vancouver&#39;s Downtown East Side in 2004.
Drew spent a total of 10 years on the DTES: seven of those years as associate Pastor at Gospel Mission, where he spearheaded the building of The Lord's Rain, which provided showers to people in the area. "God at Work: a Testimony of Prophecy, Provision and People amid Poverty" chronicles the building of the project and Drew's experiences in the area.
Drew now works as a communications and media relations consultant and voice artist, and writes a near-daily blog, "Two Minutes for Cross-Checking!". He is married to Amelia Shaw, and between them they have five grown children: Drew's kids, Aidan and Hannah Rose, and Amelia&#39;s daughters Jessica, Megan and Samantha.
Drew and Amelia now live in East Sooke, just outside Victoria, BC, with Millie, their border terrier and their cats, Daisy Mae and Suki MagnifiCat. 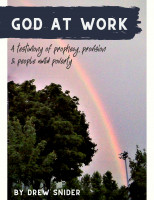 You have subscribed to alerts for Drew Snider.

You have been added to Drew Snider's favorite list.

You can also sign-up to receive email notifications whenever Drew Snider releases a new book.