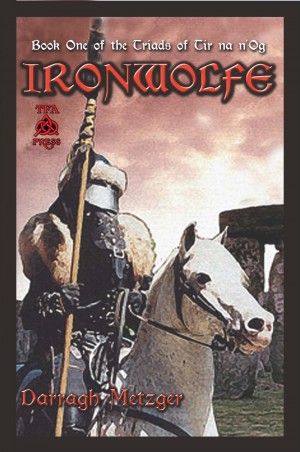 Ironwolfe: Book One of the Triads of Tir na n'Og

I make my living in the world's two lowest-paying professions: acting and writing. While my resume includes stage and screen credits, I've spent the last several years wearing armor, riding horses, and swinging swords with The Seattle Knights, a stage combat and jousting theatrical troupe. My publishing credits include plays, non-fiction articles, and short stories, one of which made The StorySouth Millions Writers Award Notable Stories of 2005. I've written two short story collections and nine--no, ten--novels to date, sold three of them in 2002, and have now re-released them under my own imprint, TFA Press. I recently completed my first non-fiction project, which is awaiting publication. I also sing and write songs for A Little Knight Music and The Badb. If I had free time (which I don't), I'd spend it with horses. I'm married to artist/fight director Dameon Willich.

Reviews of Ironwolfe: Book One of the Triads of Tir na n'Og by Darragh Metzger