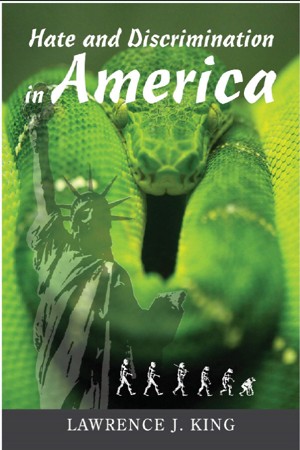 Hate and Discrimination in America

By Lawrence J. King
Lawrence J. King utilizes the freedom of speech to express his concerns by way of words in a book called Hate and Discrimination in America.
His message is about tolerance, coexistance, and compassion towards others for the sake of a better world.

LAWRENCE J. KING is a U.S. Army Veteran who lived in Europe from 1979 - 1994. During those years he was a martial arts instructor teaching Tae Kwon Do, the Korean style of self defense to the men and women of the armed forces.

Mr.King has an associates degree in computer graphics.

He is the author of a book called What The Hell Were You Thinking? It is a collection of key life experiences and reflections with an emphasis on a Buddhist approach to life.

He is also the author of a DVD called American Biker which is a documentation and slide show about the biker way of life.

Making his home in Boulder,Colorado, since 2006, Mr. King also writes for a website called Boulderspace.org

Lawrence J. King
A tribute to the fabulous people who have helped Lawence J. King in his coffee shop adventures and book and DVD promotions.

You have subscribed to alerts for Lawrence J. King.

You have been added to Lawrence J. King's favorite list.

You can also sign-up to receive email notifications whenever Lawrence J. King releases a new book.