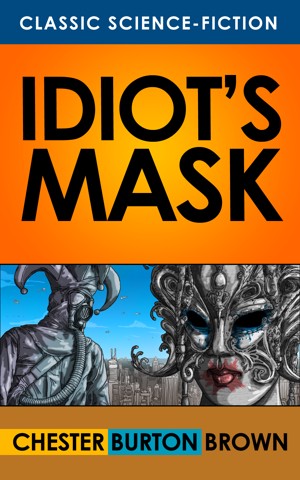 By Chester Burton Brown
Rated 4.00/5 based on 1 reviews
‘Idiot’ is the street name of a thief who has been drafted into a revolutionary army fighting a war between worlds. When he is put in charge of a beautiful hostage during a brutal battle he is forced to question his loyalties, and the consequences of that choice will steer the fate of two planets...and reveal an even deeper mystery. More
Chester Burton Brown's famous dark wit and striking imagery come to the forefront again in this gripping tale of two young lovers who are neither of them what they seem. IDIOT'S MASK is a layered story in which the voice of the narrator itself is a clue to the final mystery penetrated by the book's charismatic and unique characters, who live caught between two clashing cultures in a far distant future.

CHESTER BURTON BROWN is a compulsive storyteller and pulp science-fiction wallah based near the North Pole. He is also known on the Internet as "Cheeseburger Brown."

He is the author of dozens of novellas and short stories, as well as a regular correspondent for Wetmachine and Footprints magazine. Chester Burton Brown's first full-length novel was "Simon of Space" (Ephemera Bound, 2008). His stories have also appeared in Cosmos magazine, Stupefying Stories, and AE: The Canadian Science-Fiction Review.

Cheesburger Brown’s novella Idiot’s Mask is a strange and tragic romance set in alien worlds. The first thing I noticed about this book was how tight the prose was, and (as is characteristic of Mr. Brown) how little the author sacrifices his prose for the lengthy world building exposition of other science fiction writers. Mr. Brown’s worlds are vibrant, fantastic, and alien while at the same time remaining relatable and wholly embedded within the character’s perception.
The narrating character, Idiot, is compelling– a young man dragged into a revolution by happenstance. He finds himself a grifter, a terrorist, and even a fully socialized citizen as the conflict between Marxist classes threatens him at very personal levels. In many ways, this story is a reversal of 1984, as the libertine seeks stable ground to stand on in society. Mr. Brown writes more sincerely than those stories do about what actually motivates people trapped in these sorts of situations, though.
The only complaint I had with the book was the opening line to the final major action scene. Mr. Brown’s usual deftness in handling action scenes fails him for about a sentence. It speaks to the overall quality of this novella, though, that this was my only major complaint with it. It certainly was not anything major enough to mar my overall perception of this work.
Given the option, I’d rate this at an 8.5/10, but Smashwords is limiting.

You have subscribed to alerts for Chester Burton Brown.

You have been added to Chester Burton Brown's favorite list.

You can also sign-up to receive email notifications whenever Chester Burton Brown releases a new book.