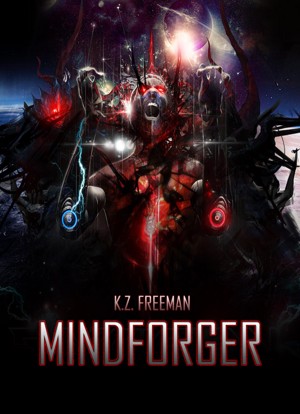 By K.Z. Freeman
Rated 2.00/5 based on 1 review
If you saw how the world will die, what would you do? What could you do? More
Max Byron is the proxy of a living God, and his God hates him. Or so it would seem. Given the power to bend men to his will, Max scours the world and does his master's bidding. He does this because of His words, words Max heard in his mind the day his family was murdered. "I can bring them back."

To do this, Max must enter a different sphere of existence, one that transforms his mind, the world around him, and brings him face to face with truths he couldn't even dream of.
Download: epub mobi (Kindle) pdf more Online Reader
rtf lrf pdb txt
Price: Free! USD
Add to Library
Create Widget
Tags: mystery awakening future cyberpunk enlightenment trippy mindforger kz freeman
About K.Z. Freeman

I love writing fiction. My books are about people - how they can change, and in turn change the world around them.

Reviews of Mindforger by K.Z. Freeman

This is an ambitious project trying to take on the nature of reality, the nature of the mind and the nature of the soul. Part of his argument seems to be that reality isn't real, but is a construction of the mind, or a series of vibrations that can be controlled by the mind. He asserts that the mind is a connection to a higher dimension, a common theme in stories of this type. He also seems to be reaching for the concept of the soul as an independent entity. I personally believe the universe is real and that the mental control he seems to think we can have over it is only available in simulation (where we are God and determine the 'laws of physics' in our simulated universe). He tries to use string theory as a basis for what he's postulating, but I don't think the math really works out. There's no math in the book and I'm not enough of a mathematician to be able to seriously critique it anyway, but my guess is the theory doesn't support the events in this story.

The plot is about a man who's family was killed by a dictator or demigod who then promised he could bring them back if the main character would complete a mission. His best friend goes with him and is another important character in the story. They soon turn the mission into a quest for the demigod himself. The plot wasn't front and center enough, often getting lost in soliloquies about the meaning of the universe, mind and soul to the point where I forgot where we were, who was present and what we were about. Maybe if I had read it with more purpose and kept notes I would have kept up with it, but leave it at this, you must expend some effort to follow it, you won't be swept along. There is a twist in his quest near the end. The novel is fairly well structured, building to a climax and getting deeper as it goes.

There is a lot of violence, whole planets are destroyed, but you never know if it's real life, a flashback, a dream sequence or an alternate reality. There are some scenes where the action is almost grabbing, but for the most part it is distant and out of focus. To one who abhors violence, that can be a good thing. There are some hints at attraction and some of the characters love, desire and/or need one another, but nothing comes of it. This is just about completely devoid of science, but is an example of what could be called psy-fantasy or something like that. A pretty common sub-genre between fantasy and paranormal but with a grander scope.

The big problem is the proofreading and grammar. Spell check was run but that was about all. There are lots of missing words and they are often critical ones. There are also plenty of wrong words and sometimes they are also critical ones. I had to back up over sentences that didn't make any sense dozens if not hundreds of times, trying to figure out what it was supposed to say. I don't think there is an occurrence of the word 'off' in the book, he always uses 'of'.

You have subscribed to alerts for K.Z. Freeman.

You have been added to K.Z. Freeman's favorite list.

You can also sign-up to receive email notifications whenever K.Z. Freeman releases a new book.