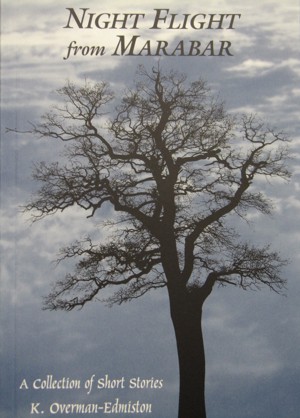 The Beekeeper - from the collection: 'Night Flight from Marabar'

By Karen Overman-Edmiston
Many years ago, the beekeeper struck a terrible bargain. He could have as much wealth as he wanted and a life as long as he wished. In return, however, he must secure the lease of a thousand souls for one year. Set on the Greek island of Kythera this story captures daily life and culture as it is today and gives insights into human nature as it has been for thousands of years. A haunting story.
Download: epub mobi (Kindle) pdf more Online Reader
rtf lrf pdb txt
Price: Free! USD
Add to Library
Create Widget
Tags: loneliness greece easter beekeeping kythera human soul
About Karen Overman-Edmiston

The genesis of the novel 'The Avenue of Eternal Tranquillity'. (Nautilus Book Awards winner 2010)

I love to travel, and I often use experiences from my travels in my writing. For example, when flying from Vienna to Moscow a few years ago I had a bout of food poisoning so, on reaching the hotel in Moscow I was in bed for about 36 hours. I awoke in the wee hours on Boxing Day and went to the window, it was still dark outside. Down in the snow in the car park between the hotel and River Moskva a man had got out of his car, taken off his hat and coat and laid down in the snow. He looked as though he had simply gone to sleep, curled on his side. The police came, took notes, and left the body under a piece of matting.

Some time later I boarded the trans-Siberian train for Siberia and China, but I couldn't get the image of the man in the snow out of my mind. Why would a person do such a thing? He would have known that taking off his warm clothes and choosing to lie down in the snow in such ferociously low temperatures would mean certain death. Oddly enough, he looked quite peaceful and resigned to his action.

'The Avenue of Eternal Tranquillity' is a sort of fictional history leading up to that moment. An attempt at an explanation as to why someone would choose to die and why, perhaps, they would seem so comfortable in making such a choice.

I know it sounds a bit depressing, but it's actually a very uplifting story! We are a culture, I think, that deals badly with death, particularly if the event is unexpected. I wanted to write a story that would provide some comfort or reassurance to those who have lost someone they love. I hope this book is reassuring, especially for those who have quieter voices.

The intertwining story involves a couple travelling the trans-Siberian from Beijing to Moscow in the present day - full of fascinating insights for those who love to travel! The other couple, Pyotr and Yuliya, live in Moscow in the 1960s. The couples’ stories plait throughout the novel but come together at the novel’s end.

The landscapes traversed really provide a backdrop to the more important internal landscapes of each of the characters. The book is simply an ode to tenderness, to the kindness people can offer to one another. Kindnesses that seem small but really are the essence of being alive; living a full life.

People’s motivations and their interior life are at the core of Karen Overman-Edmiston’s writing. In addition, impressions and experiences gained while travelling are strong contributors to her work. Both of these factors are strongly evident in the recently published novel, 'The Avenue of Eternal Tranquillity', as well as in the earlier publication, 'Night Flight from Marabar', a collection of short stories.

Karen Overman-Edmiston was born in the United Kingdom. Educated in England and Ireland, she finished her studies in Australia, gaining a Master of Arts at the University of Western Australia.

Karen has written for the stage and has had competition-winning plays performed, including at the Perth Festival of the Arts. She is also a prize-winning short story writer who has had several stories published. 'The Avenue of Eternal Tranquillity' is a 2010 Nautilus Book Awards winner in the Fiction/Visionary Fiction category.

Night Flight from Marabar was reviewed in the Australian Book Review in September 1999. In his review, Ben Zipper commented that the writer’s work ‘emerges with a strong coherence and singularity of tone.’ and that the author ‘uses location to wise advantage, as a tool of explaining and exploring human experience.’ Zipper concluded his review with the comment, ‘This collection clearly shows promise of more to come.’ Copies of the anthology have sold well across Australia in bookstores and through online sites.

Having previously worked for the West Australian government, Karen runs her own consultancy business as well as continuing her writing.

You have subscribed to alerts for Karen Overman-Edmiston.

You have been added to Karen Overman-Edmiston's favorite list.

You can also sign-up to receive email notifications whenever Karen Overman-Edmiston releases a new book.