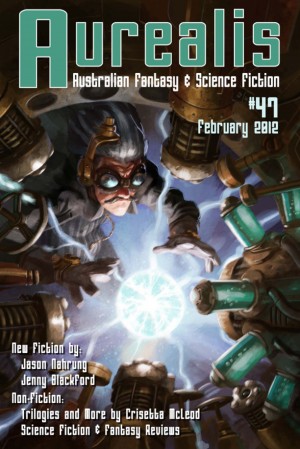 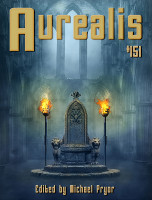 Issue #47 is the latest in the new, electronic incarnation of the Aurealis magazine. This month is the first instalment since the "reboot" that has a price tag attached to it, but at $2.99 I don't think anyone will be complaining.

There were two stories in this edition. The Sacrifice by Jenny Blackford harkens back to a retelling of ancient Greek myth, focusing on the escape of Jason (of Jason and the Argonauts fame) from Kolkhis. The story is mostly told from the point of view of Medea, the virginal princess that helps Jason escape from her father. The introduction tells the main part of the story - the willingness of Medea to (somewhat brutally) sacrifice her young brother to help Jason escape. The story was well written and an enjoyable read. I would have hated to live in ancient Greece - the gods just couldn't leave people alone! Having said that, in this instance the gods merely fanned the flames of infatuation - it took a human being to think of a truly horrific course of action to escape a seemingly impossible situation, and use love to justify it all.

The second story was Breaking the Wire by Jason Nahrung. I quite enjoy Mr Nahrung's tales of outback horror - his Smoking, Waiting for the Dawn was one of my favourite tales told in the now sadly defunct Terra Incognita Speculative Fiction podcast. Breaking the Wire didn't disappoint, a tale that takes that age old practice of farmers maintaining their fence lines and adds a werewolf twist to it all. I loved the characters and the atmosphere was fantastically built. As has been my previous experience, I was left wishing there was something by Mr Nahrung set in the same kind of world but in a longer format. But speaking of Mr Nahrung and longer form work, I see that he has a book coming out soon from Twelfth Planet Press. Look forward to that as well.

As well as Carissa's Weblog providing a round up of some of the more interesting articles around on the web in the area of Australian speculative fiction, this month's edition also contained an editorial pondering the question of whether speculative fiction readers really are more tech savvy than the rest of the reading population. There was also a very interesting piece on the use of the multi-book series by speculative fiction writers by Crisetta MacLeod.

I'm enjoying the stories in Aurealis. I also receive the monthly email update, in which I won a book last month, so I certainly can't complain about that. Next edition will include The Descent of Traag by Matt Bissett-Johnson and Thirty Minutes for New Hell by Rick Kennett.

You have subscribed to alerts for Dirk Strasser (Editor).