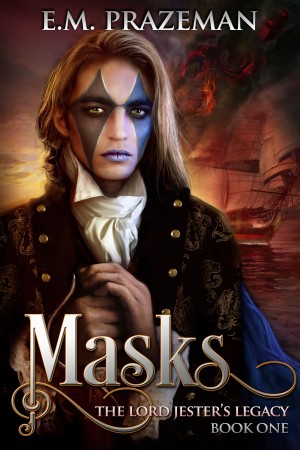 Book One of the Lord Jester's Legacy

"Prazeman has crafted a magnificent, credible fantasy where noble lords symbiotically bond with masked jesters whose machinations and assassinations further their ambitions without imperiling their souls. She does a uniquely wonderful job of honoring her readers' intelligence, parsing out little hints and nibbles, barely enough information to figure out what is going on as her hero navigates the intrigue. The result is a swift and satisfying read that leaves us begging for a sequel. Whole-heartedly recommended!" – Lawrence Kane, ForeWord Magazine

"The world of MASKS is a fantasy world unlike any other I've encountered, rich with mystery, intrigue, and danger, and its hero Mark is complex and unusual – a young man trying to solve the riddle of his parents' deaths while concealing dangerous secrets of his own. No one in this book is exactly what they seem, Mark least of all. We all have our masks, and MASKS lifts the façades of its characters and its world to expose the ambiguous truths behind them." – David Levine, Hugo Award Winning Author
Download: epub mobi (Kindle) pdf more Online Reader
rtf lrf pdb txt
Price: Free! USD
Add to Library
Create Widget
Tags: fiction coming of age adventure fantasy duels lgbt friendly tall ships fencing lgbt characters lgbt love lace and blade bustlepunk secondary world fantasy
About E.M. Prazeman

EM Prazeman is, of course, a pseudonym.
The person behind the Mask Trilogy is a Czech refugee from the '68 invasion living in the Pacific Northwest of the United States, indulging an ancestral love for writing, painting and gardening.
EM has studied mathematics and engineering, judo and karate, and isn't a bad shot. But can't throw knives worth a damn.

About the Series: The Lord Jester's Legacy

Mark Seaton wants to become a sailor like his father, but instead he's drawn into a deadly world of intrigues and potent masks that can change what you are capable of, and who you are.

For the first few pages, E. M. Prazeman's Masks had my mind reeling—much the same feeling as culture shock. I read on, carried through my puzzlement by the luscious writing, until I realized that the feeling actually was culture shock. Young Mark Seaton, dreaming of becoming a sailor like his father, lives in a world similar to an archaic version of ours—similar but for the culture shock.

For Mark, there is nothing shocking about his world—until his mother is murdered, his father disappears, and he is kidnapped and sold into a world of perverted nobles to be trained in the masked arts of seduction, treachery, and murder.

Mark grows to manhood unable to escape this immensely rich, exotic world, but never quite accepting its immoral premises. When a duel kills both masked opponents, he seizes upon one of their identities and escapes to an island world in which he feels more at home. But this new world is just as beset with intrigue as the one he escaped, but now he finds himself at the conspiracy's center.

His hope for a good, honest life is not yet to be fulfilled. To save his new home, he must return to the one from which he escaped. Luckily for the delighted readers of Mask, Mark's adventures will be continued in Confidante, Book Two of The Lord Jester's Legacy.

You have subscribed to alerts for E.M. Prazeman.

You have been added to E.M. Prazeman's favorite list.

You can also sign-up to receive email notifications whenever E.M. Prazeman releases a new book.