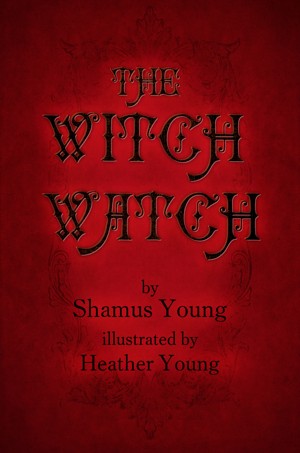 By Shamus Young
Rated 4.09/5 based on 11 reviews
A young lady with a head for invention, a boy with a gift for sorcery, and a rotting corpse with a dry sense of humor all find themselves fighting against a strange new threat in Victorian-era London. More
Gilbert has two problems. The first is that he died. The second is that he didn't stay dead. Now he's hunted by the Church, the cult that revived him, and Her Majesty's Department of Ethereal Affairs. Gilbert must keep his head long enough to save London, the Queen, and his brassy and opinionated mother from the forces of evil and good alike.

Shamus Young is a programmer specializing in old-school graphics techniques. He's the author of the blog Twenty Sided. He's the creator of the webcomics DM of the Rings and Stolen Pixels. He's one of the hosts of the videogame commentary series Spoiler Warning. He's tired of writing about himself in the third person.

I had originally started on Witch Watch back when it came out, but got derailed from finishing it. Having finally done so, I can say it's a solid light fantasy/steampunk novel. Shamus Young writes with a touch of Pratchett-esque humour and full command of the English language. The story moves steadily forward, and takes some unexpected turns along the way.

Good adventure, worth $5. Great setup and interesting story. I thought the characters were pretty believable, although the dialogue is a bit stilted. I think it's 3.5/5, a good solid book but not something that is going to make literary history.

If you like magic adventures this book is a good bargain, especially for YA or older elementary kids.

This book is awesome. It's like Terry Pratchett wrote a book set in Victorian London.

This is a nice, quick read for any age capable of grasping humor. It is an interesting presentation of a simple story... or is it simple? Beautiful illustrations.

When I read I don't get too technical. I have some simple requirements. Does the story grab me right away? Does it keep me interested? Does it leave me wanting more after the last page? For the Witch Watch the answer to all the is yes.

*sigh* I really wanted to really like this book. And not just wanted, I expected I would — quite apart from being a fan of Shamus works in general, I positively devoured "Free Radical" and "How I Learned", and enjoyed them immensely.
His writing has always been short without being abrupt, flowing without being hard to follow and thorough without being needlessly verbose.

So it is with some trepidation that I have to come out and say that The Witch Watch left me with an impression of being more like a manuscript than an actual book. Or a children's book, maybe.

But let's get some of the good stuff down first, so that it doesn't seem like I didn't like the book (I did, just not as much as I had hoped). The story is interesting and gets going from page one — no enduring a long introduction before you "get to the good parts". The alternate history London/world is very well thought out, and shows itself unobtrusively, without long-winded exposition (a skillful application of the "show, don't tell" principle that's so important in Shamus' professional background — videogames). A strong, independant central female character is a bonus as well, and even more so because she's a reasonable strong, independent female character. Too many books have the tendency to equate independence and strength of will with stubborn recklessness.

So it's definitely worth a read, and if you're getting the $5 digital version, the money won't be wasted. That said, it's not all wine & roses...

Most of the dialogues seem awkward and stilted, and maybe as a consequence, almost none of the characters (with the exception of Gilbert's mother, interestingly) seemed not entirely fleshed out, like they were stuck partway between cardboard cutout story characters and real people. It gets better with time, but the feeling of them not quite being there never disappears entirely. Also, many instances of the spoken dialogue felt lacking an emotional "wrapping", i.e., an accompanying mention of the speaker's facial expression or body language.

The same "only sort of there" problem seems to afflict the world of the Witch Watch. For about the first two thirds of the book I was left with the feeling of watching a low-budget theater play, instead of experiencing part of a living, breathing world. I'm no literary critic so I can't readily point out the reasons for this, but until near the end, the world around the characters never seems to be very real, despite the obvious work that has gone into the world-building, from overall sociopolitical situation down to the scientific details of how the magic works. Only at the end, when more and more people get involved, does it all start to really come together and bring tho world to life.

There is one thing that might have affected my perception of the book, though. I was reading (listening to the audio book version of) Diana Gabaldon's The Fiery Cross at the same time as reading The Witch Watch, so maybe some unconscious comparisons did take place. The Fiery Cross is much larger work, written with much more detail, not to mention a fifth book in a series with four books worth of world-and-character-building behind it. If compared side-by-side, The Witch Watch could unfairly appear somewhat rushed and simplified.

In summary, I think it would make a great children's book, especially for kids who are into action-packed adventure stories, and at $5 it's well worth the price. Just don't get into it with high expectations.

I enjoyed this book immensely from start to finish. It is fun, witty, entertaining, and engaging, and I would heartily recommend it to anyone that was a fan of the genre.

However, as other reviewers have said, it is not a flawless book. I found that while the characters were entertaining and sympathetic to work as protagonists, they lacked a lot when it came to depth. Each has easily identifiable traits that they rarely variate from.

That said, it is still incredibly enjoyable. The first few pages in particular are some of the most well written I have read in recent memory. If you haven't already, be sure to take a look at the sample, because that will sell you on the book far better than any review can.

It is also genuinely funny without becoming a full on comedy. There are moments that are quite literally laugh out loud funny without feeling out of place in the work, which is impressive. It can also shift into a much more tense and dramatic style very effectively, with two chapters in particular being very exciting.

In the end, while the book was not everything I could have hoped for, it came very close and was still one of the most enjoyable novels I've read for quite some time.

The book is written in a style that I don't enjoy (I think it can be compared to the style of Terry Pratchett's works which I don't read for the same reason). I find this surprising based on my experience with author's previous works.

This book is good, but not excellent. I only hope that it's Shamuses "Colours of Magic", and his "Guards! Guards!" and "Soul Music" are to follow.

The wit is there, plot holes are very few or non-existent, but action pieces are weak, and this book is more about action than about dialogues, which is very unfortunate, because I think Shamus would have much more success with a book where heroes talk more and do less.

This is a thoroughly enjoyable book. It's not flawless; and I'll address those (minor) quibbles at the end of this review, but it's nearly flawless, and certainly deserving of five stars. I'd like to start, however, by stating again how much fun this book is. There's a lot of stuff here, and it's all well done. The characters are fun, the action is good, the adventure is, well, adventuresome, and the conspiracy, once it all comes into place, is absolutely brilliant. Young doesn't cheat, either. Small clues are given throughout, and it all leads up to a rather satisfying villainous reveal. That's another thing this book has in its favor. The villain is very, very smart, and does not do evil things for the sake of evil, or with only flimsy justification, which is nice to see, considering how easily a book with this kind of plot could have slipped into that territory.

The thing this book does best, however, is dialogue. It's witty, memorable and it really helps to give each character a unique feel. I cannot say enough how pleased I am with the conversations these characters have with each other, and how much fun they were to read.

The only quibble I really have has to do with description. Some (very small) parts feel a bit rushed, not due to issues of pacing (which is quite well done,) but due to a lack of description, or rushed description. Unfortunatly, the best examples are also spoilers, so I don't really want to put them here. I'd like to emphasize though, that these are few and far between, and that I can think of only three small instances offhand. Still, they struck he as important enough to be worth mentioning in this review.

On the whole, this book is quite excellent, and I've been recommending it to my friends and family since I picked it up yesterday. The small issues mentioned above do not diminish from my enjoyment of it in any meaningful way, and it does deserve five stars.

You have subscribed to alerts for Shamus Young.

You have been added to Shamus Young's favorite list.

You can also sign-up to receive email notifications whenever Shamus Young releases a new book.