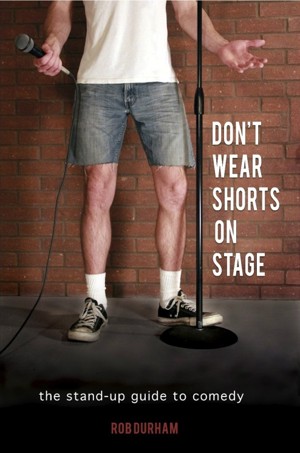 By Rob Durham
The previously unwritten rules of stand-up comedy are now explained for anyone wanting to make money in the business. It also gives comedy fans an inside look on what the lifestyle is really like. More
“Don’t Wear Shorts on Stage…” is not only a complete guide to the previously unwritten rules of stand-up, but also a quick reference for the hundreds of questions that most comics don’t even think to ask. Durham points out mistakes most comics make before they even take the stage and continues his advice throughout the different levels of a comic’s career. His knowledge stems from over a decade of performing along with three years behind the scenes at one of America’s top clubs where he soaked up tips and anecdotes from some of the business’s biggest names like Dave Attell, Louie Anderson, and Greg Fitzsimmons. While most comedy books try to teach “funny,” this one shows you what to do with it. Whether you're a comic or just a fan of stand-up, this book gives you an inside look at the most misunderstood industry in entertainment.
Available ebook formats: epub mobi pdf rtf lrf pdb txt html
First 15% Sample: epub mobi (Kindle) lrf more Online Reader
pdb
Price: $9.99 USD
Buy Add to Library Give as a Gift
How gifting works
Create Widget
Tags: standup comedy comedian comedians standup comedyhow to be funnyimprov secretsimprov comedy tipscomedy improv tipshow to do stand up comedyhow to do stand up
About Rob Durham

Rob Durham is a touring stand-up comedian and a high school English teacher, so his students learn right away not to heckle (or at least to do it with correct grammar). On top of his two careers, he’s an up-and-coming author with the highly-praised instructional guide to comedy, Don’t Wear Shorts on Stage, under his belt, and his fourth book, Around the Block, on the way. With a smile that says “I didn’t get my braces off until I was 27” and a hairline that’s bullied into staying where it is for now, Rob’s innocent look helps him vent about his career as a teacher, his dating history, and his spunky wife. For almost two decades, Rob has built an original act that favors the cleaner side of comedy but should still be kept away from the ears of his students.

Don't Wear Shorts on Stage Commercial
A parody of Jonah Mowry that is not intended to disrespect his cause in any way.

You have subscribed to alerts for Rob Durham.

You have been added to Rob Durham's favorite list.

You can also sign-up to receive email notifications whenever Rob Durham releases a new book.