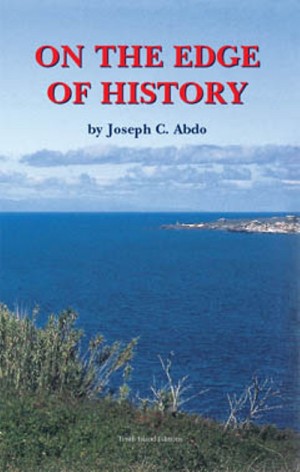 On the Edge of History

By Joe Abdo
The Dabney family from Boston settled on the island of Faial in the Azores during the 19th century and quickly became involved in the political, literary, intellectual and religious changes taking place in Europe and America. This book provides a glimpse of their life and significant influence on 19th-century history at the crossroads of the Atlantic.

Joseph, or Joe, Abdo has a background in health care as a lab technician, strategic planner and hospital administrator; college level instructor in microbiology and English as a second language; translator from Portuguese and French into English; acting on stage and in films; and writer.
His first writing experience was developing plans for the health care delivery system in Los Angeles and Orange Counties and the west San Francisco Bay area. Taking a mid-life break, he moved to Portugal where he lived for many years. He developed a great interest in Portuguese history and culture and started writing articles related to Portugal. He soon became a regular contributor to several magazines in Portugal and abroad, publishing more than 80 articles.
His writing evolved from magazines to books and the first book he wrote was Tram Tours of Lisbon, which described places of interest along Lisbon’s century-old electric tram routes. This was totally rewritten and published in 2014.
During a vacation to the Azores, Joe discovered the Dabney family from Boston, Massachusetts. They provided three generations of American Consuls to the Azores in the 19th century. He told the story of this important, but relatively unknown, American family in the book On the Edge of History.
This was followed by The Quiet Radical, the biography of Samuel Longfellow. He had been tutor to the Dabney children and was the youngest brother of America’s important poet Henry Wadsworth Longfellow. Samuel was influential in the more radical social and religious movements in America during the 19th century.
Joe’s third historical nonfiction book, The Christian Discovery of Tibet, was the story of Portuguese Jesuit Padre Antonio de Andrade. He was the first European to cross the Himalayas to the city of Tsaparang in the kingdom of Guge in western Tibet. Padre Adrade established a mission there that functioned for 14 years. The mission was closed not long after the conquest of Guge by the neighboring kingdom of Ladakh, partly to stop the Christian influence of the Jesuits.
Trying his hand at film scripts, he wrote Mary, a story about a freed slave who was placed as a spy in the home of Jefferson Davis, President of the Confederate States during the American Civil War. It was made into a short film and was released in mid-2013.
Joe is now making his first foray into the realm of fiction.
He continues to enjoy writing.

You have subscribed to alerts for Joe Abdo.

You have been added to Joe Abdo's favorite list.

You can also sign-up to receive email notifications whenever Joe Abdo releases a new book.