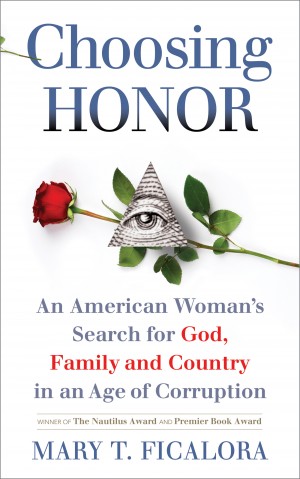 The seeds of Mary T. Ficalora's book, Choosing Honor: An American Woman's Search for God, Family, and Country in an Age of Corruption, were planted with numerous childhood dinner-table discussions on hotly debated social and political topics. She notes: "We were a devout Roman Catholic family and there was much to be concerned about and invariably our family ended discussions on the note that we trusted our Constitution and the honor of our government authorities."

But, that faith has been broken, from Nixon's Watergate to Bush's Iraq, leaving Mary to feel her faith in government and honesty in any level of our society is shattered. This is why she is actively speaking out, making a call to action, and promoting a revelation of things to pay attention to and value.

Mary, 48, spent her childhood of the late 60's and early 70's in South America and Italy. The San Jose native describes herself as a "hippie-minded, ex-party girl who is now a soccer mom." For the last decade she's been producing and coordinating continuing education courses for psychologists (Professional Psych Seminars), as well as substitute teaching in Los Angeles.

The teacher, event coordinator, and television producer is also an active mom, volunteer, Cub Scout leader, and pre-school administrator, but her biggest challenge has come as an author.

She received a Seattle Emmy nomination in 1986 for producing and directing "The KXLY Video Rock-Off." She began her career in film and television production. Mary received a producing fellow certificate from the American Film Institute Center for Advanced Film and Television Production. Mary worked for several years at KAET-TV in Phoenix, Arizona and KXLY-TV in Spokane, Washington. She also was the assistant to the producer and post-production coordinator for a Disney program in the late 80's, Backstage at the Zoo.

You have subscribed to alerts for Mary T Ficalora.

You have been added to Mary T Ficalora's favorite list.

You can also sign-up to receive email notifications whenever Mary T Ficalora releases a new book.