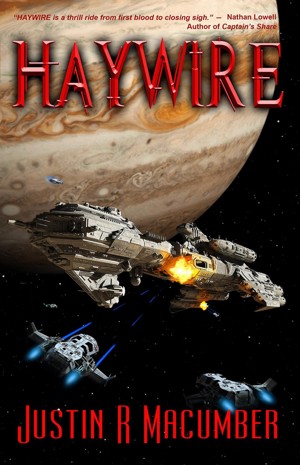 By Justin R. Macumber
Rated 4.00/5 based on 1 reviews
Once our greatest weapon. Now our gravest threat.

A century ago, super-soldiers known as Titans drove alien invaders from the solar system and back to their home world. Now the Titans have returned, infected by a virus and compelled to destroy humanity. Will a scholar, her son, and the only Titan able to resist the infection find a way to save humanity from its own greatest weapon?

Justin Macumber is an author of speculative fiction and horror. When he is not hard at work on his next story he co-hosts the popular Dead Robots’ Society podcast. He and his lovely wife live in the Dallas/Fort Worth metroplex along with their motley pack of dogs and cats that they think of as their children. Visit him online at justinmacumber.com and deadrobotssociety.com.

After hearing the trailers for Haywire over many episodes of The Dead Robot Society I decided that it deserved a read. Actually it didn't take that much persuasion as I'm pretty big into Space Opera, techno thriller Science Fiction with lots of military action thrown into the mix. Hmmm.
Super-soldiers have been developed, to fight off an alien race bent on annihilating humankind, by a mad scientist who is long gone with his technological secrets. In the course of preventing the human race from being destroyed by it's saviors a teenage boy is transformed, a lonely woman finds love and a heroic soldier finds peace.
I enjoyed the flow of the story, the development of the characters and the resolution to the problem. Liked the book and think that it deserves a prequel.

You have subscribed to alerts for Justin R. Macumber.

You have been added to Justin R. Macumber's favorite list.

You can also sign-up to receive email notifications whenever Justin R. Macumber releases a new book.