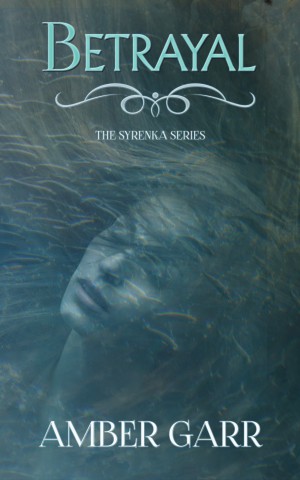 By Amber Garr
Rated 4.40/5 based on 5 reviews
Life as a mermaid can be suffocating.

A heartbroken Eviana returns home to find herself with the responsibility of leading her clan into war. As loyalties are tested and the casualties increase, Eviana learns that sometimes it is impossible to delineate between friends and enemies. More
Life as a mermaid can be suffocating.

Eviana Dumahl has returned home as a clan leader, an orphan, and a heartbroken teenage girl. Her parents are dead and her boyfriend, Brendan, has decided that he needs some time away. While battling her inner turmoil, Eviana is forced into the war that Lucian Sutherland has incited amongst her own kind. With the help of Kain, her friend and formally betrothed, the two work together to prove that they deserve their birthrights as young merfolk leaders.

When the Council requests a demonstration of Eviana’s mermaid powers, she finds herself with an opportunity to win back Brendan’s heart. But her orders to train with a repulsive merman and the presence of an attractive new suitor challenges Eviana to embrace her leadership and resist temptation. Lucian is after her, and no one seems to understand why. Loyalties are tested as the casualties increase, showing Eviana that sometimes it is impossible to delineate between friends and enemies.

Amber Garr spends her days as a scientist and nights writing about other worlds. Her childhood imaginary friend was a witch, Halloween is sacred, and she is certain she has a supernatural sense of smell. Amber is a multiple Royal Palm Literary Award winner, author of the bestselling The Syrenka Series, The Leila Marx Novels, the award-winning The Water Crisis Chronicles, and the Death Warden Series. When not obsessing over the unknown, she can be found dancing, reading, or enjoying a good movie. Find out more at www.ambergarr.com

This series is really worth your time if your into young adult you will not be dissapointed, who would have thought mermaids would jump in and take a piece of the paranormal/fantasy action genre.

Im really looking forward to the last installment and Im giving my vote to Kain I hope Eviana sorts her feelings out gets her act together and get with Kain.

Firstly, Ms. Amber Garr, please please please stop with all the yummy Guys you are throwing my way!!! I was totally torn apart in the first book (Promises), I don’t need to be completely splintered. Seriously, Brendan is just hot and the love of Eviana’s life. Kain is gorgeous and what’s not to love when the guy is just so gentle, generous, warm and loving?! And OMG, Graham is Bad-Boy-Licious with a to-die-for accent! How’s a girl to choose? I’m glad that’s not my job

Eviana went home without Brendan to assume her responsibility as her clan leader. She may be determined to be a good & strong leader but reality is she is young with no training whatsoever. On top of that, she’s just lost (hopefully temporarily but it still hurts) the love of her life. She is in a pretty bad spot right about now. Things are about to get any better though as Lucian Sutherland wants her back.

The youngest member of the Council, Graham Forrester, shows every sign of being a dissipated young soul with some strong powers. He is also very attractive and Eviana is troubled by this attraction. He, however, has no compunction about his attraction to her and is willing to play the game.

I’m loving this book! I’m loving the story and am loving Eviana. She is strong but there were moments of weaknesses. I’m happy that her vulnerability isn’t hidden but is known to her friends & supporters. I have to admit I wasn’t a tad surprised when I found out why Lucian wanted Eviana and was slightly disappointed though I couldn’t really see any other reason… and Eviana is still the only fully developed character with pretty much 99% of the book focused on her. Well, I didn’t mind it so much in this book as I was really drawn to the story & to Eviana although I do wish to have had that few sneak peeks into Brendan or Kain or even Marisol. I really want to know what make Kain tick!

Betrayal, the second book in Amber Garr's Syrenka Series, is a riot of emotion. The pace is just as easily flowing as book one, Promises, and captures the audience's attention just as well.

Garr twists and turns the plot so that events become unpredictable and very telling. Eviana is trying to step up and show her clan that she and Kain are suitable leaders, even in their young age. Eviana's series of training, both physical and mental, aren't enough to prepare her for the truths she learns and the biggest obstacle set in her path, Lucian Sutherland. In between all mermaid matters is Brendan, the love of Eviana's life and selkie. Their relationship has become tenuous and heartbreaking, and is most likely the biggest unknown in the story. There's no telling what's in store for the two with so many reasons for them to not be together.

While Betrayal is a great story, it doesn't seem to have as big an impact in the Syrenka Series for the second installment. The plot changing revelation doesn't come until the near end of the story, and everything before it is more of a way to build upon the fantasy world presented and back up the reasons why Lucian Sutherland is a formidable foe. The conclusion of the series, Arise, will hopefully be the ending of all endings!
*ebook provided for review and blog tour purposes*
Also posted on Lovey Dovey Books

Betrayal
(Source: I received a digital copy of this book for free on a read-to-review basis as part of the ‘Syrenka’ Series Blog Tour)
This is Book 2 in the ‘Syrenka’ series, and starts a few weeks after the end of book 1 – Promises.

Eviana has taken over as clan leader, following her parent’s death. She’s unsure of her new position, but doing her best; while trying to come to terms with the fact that her boyfriend Brendon is taking time away from her.
Forced to prove her worth to the council by demonstrating her new found powers, Eviana finds herself shipped off back to Jeremiah’s house to learn about using her powers, along with the mysterious Graham, a British boy who was the youngest member of the council before Eviana and Kain joined. Eviana finds herself strangely drawn to Graham, even if he is infuriating at times, but has her doubts as to his loyalties.
When Lucian starts attacking multiple mermaid clans, Eviana knows that she has to do something, but what can one teenage mermaid do against the sort of forces that Lucian has? And how many have to die before Lucian is stopped?

I enjoyed this book. I love Eviana, and I totally love Kain. I really think that Eviana should have married Kain instead of running off with Brandon, although it is debateable as to whether things would have been different if she had.
I found the surprise arrival of Graham to be interesting, but was a little disappointed that Eviana had feelings for him. She already has Brendon and Kain to think about, and in my opinion a third love-interest wasn’t really needed. I also was in two minds as to who Graham was and what his intentions were anyway.
I have to say that I did see the twists in this instalment coming, although that didn’t ruin the story for me. It is pretty obvious that someone is going to betray Eviana from the title! Maybe a different title would have decreased the chances of me guessing the ending!
Overall; this was a good second book, and I am looking forward to finding out what happens in the final instalment ‘Arise’!
7 out of 10.

As with the first book I loved the pace of the story, there was never a dull moment. I was almost on the edge of my seat the whole time wanting to know what was going to happen. Quite a few things that I was not at all expecting. Loved this one just as much as Promises, if not more.

Eviana is sent away to try and strengthen her powers in preparation for the upcoming war. Attacks are happening everywhere, harming, and even killing, some of Eviana's friends and family, Lucian is behind it all and he is still after Eviana, but why?

As I think everyone has, based on the title I assumed that someone was going to betray Eviana in this book. Although there turned out to be more than just one betrayal, I had a suspicion of a particular person right from the beginning (which turned out to be right), but throughout the book I just couldn't be sure. I had no idea what to expect, and that was something I really enjoyed. After the first book in the series we knew (or at least I assumed) there was a particular reason Lucian wanted Eviana, and while a reason was revealed to us, I am still not sure if it is the whole reason. So I can't wait to start the next book Arise and find out what is going to happen.

I can't really think of much to say about the characters. I think we definitely got to see Brendan's love for Eviana more in this book and understand him more as character, but I do not like Brendan any more. I can understand his situation, but I still don't like him. I like Kain's character, and am hoping to see a romance develop between him and Eviana in the next book, I guess we'll just have wait to see. Graham was a new character introduced to the story in Betrayal. While I liked his character, and the flirting with Eviana was fun, I felt a bit like if Eviana was so in love with Brendan then she wouldn't be so attracted to Graham. So that was all a little weird for me.

I enjoyed this book just as much as the first one, should definitely check it out if you have read Promises, and if you haven't I would highly recommend you give it a go. I am super excited to get started on Arise.

Thank you so much to the author, Amber Garr, for sending me a copy. Having tons of fun with this series.

This review is also on my blog The Confessions of a Book Nerd :)

You have subscribed to alerts for Amber Garr.

You have been added to Amber Garr's favorite list.

You can also sign-up to receive email notifications whenever Amber Garr releases a new book.