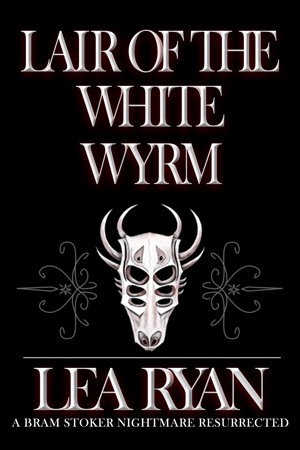 Lair of the White Wyrm

By Lea Ryan
Rated 4.00/5 based on 1 reviews
A modern horror inspired by Bram Stoker's final novel.

Sometimes when you run from your problems, they follow you.

Eric Duncan wants nothing more than to be an ordinary, sane guy. He believes he can escape his troubled past by leaving home. However, the voice in his head, that of his dead friend Benjamin, fights him every step of the way. More
Sometimes when you run from your problems, they follow you.

Eric Duncan wants nothing more than to be an ordinary, sane guy. He believes he can escape his troubled past by leaving home. However, the voice in his head, that of his dead friend Benjamin, fights him every step of the way.

Eric finds his new home is a place filled with secrets far darker than his own. A monster prowls the grounds, and it wants to keep him close.

He will discover that his inner demons aren’t the only things he should fear. In order to confront the wyrm and survive, he must also face the worst parts of himself.

Lea Ryan is an author of romance and paranormal fiction. She lives in Indiana with a husband and an equal ratio of cats to fish to human children. When she isn't writing, she can be found playing video games, drawing, or hiding in a quiet spot, dreaming of things improbable.

While reading "Lair of the White Wyrm", it was easy to picture this as one of the latest movies on the Sy Fy channel, or as an hour long Alfred Hitchcock Presents, Tales from the Darkside, or Twilight Zone prodigy. It's not bad if you like that sort of thing. The story itself, although not short, was significantly shorter than your average length novel. Is that the criteria for a novella? Who knows? This amateur doesn't, for sure.
I enjoyed the way in which Lea Ryan dug into the character of Eric. It really felt as though it was going in the right direction, but it still left me wanting to know a little bit more about him. As for the other characters, their smaller bits of development suffice for the length of the story, though I cannot help but wonder if a little more time devoted to some of them would help round the tale out a bit more.
As for the storyline itself, I found it to be somewhat predictable. Early on in the book I found myself saying, "I know how this subplot is going to turn out", and I was right more often than not. The ending itself, however, was not so easily predicted, though I thought it would be. Some of it I nailed, while the rest was actually a scenario I had not thought of, and that made it just a bit more satisfactory for me, and worth the read.
I cannot give a half a star rating, but this book ranks 3.5 for me. 3 being ok, and 4 being I really liked it.

You have subscribed to alerts for Lea Ryan.

You have been added to Lea Ryan's favorite list.

You can also sign-up to receive email notifications whenever Lea Ryan releases a new book.