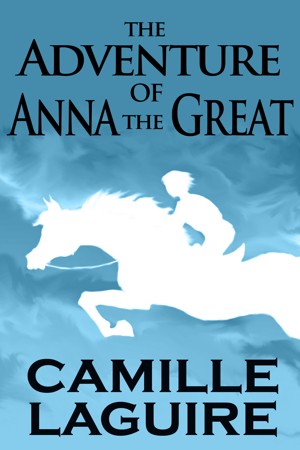 The Adventure of Anna the Great

By Camille LaGuire
Rated 4.00/5 based on 1 review
Anna is a runaway girl disguised as a boy. After she nearly thwarts a kidnapping, she is offered a job in the royal stables. Surrounded by the intrigues of the court, she has the time of her life. But this is Anna's only chance at adventure. She finds the hero admirable but boring, and the villain is both dead wrong and a lot of fun. Who should she follow?
Download: epub mobi (Kindle) pdf more Online Reader
rtf lrf pdb txt
Price: Free! USD
Add to Library
Create Widget
Tags: adventure horses kidnapping swashbuckler sword girls adventure girls horses swordplay ruritanian

Reviews of The Adventure of Anna the Great by Camille LaGuire

--------------------------
A girl’s appearance was very important to Celeste, but then she was truly lovely. Her skin was translucent and glowing, like a pearl. Her eyes were large, and her little mouth was red and round. Her body was rounded too, and already quite feminine.

Translucent, glowing skin? Floating across the floor? There are certain things I can't handle in my books, and flowery descriptions like that are one of those things (unless part of a parody and meant to be funny). Fortunately, I stuck with it and kept reading, and the flowery descriptions were confined to the description of Anna's cousin, Celeste, at the beginning of the story.

Although described as YA, I'd consider this story as middle grade (MG), appealing more to an 8-12 year-old audience rather than a YA/12+ one. It's just the kind of story I would have loved to get my hands on in 4th and 5th grades. By the time I was in 6th grade, I preferred my books to have some romance, which this book doesn't have, but that was just a personal preference on my part.

The author sucked me in with the story's mystery, and I didn't even realize how unrealistic much of the story was until I had finished; I was consumed with learning what the mysterious Mrs. MacGuffin had to tell the queen and why Hugo and Tybalt kidnapped her. It was just a fun adventure story.

After finishing, I was left with some questions and wishing I had gotten to see more of Anna's back story before she left on this grand adventure. These aren't complaints exactly, just questions I was left with, and I guess it's because I was interested in Anna that I want to know more. For example, did she practice riding a horse astride (sorry...I don't know if that's correct horse terminology)? She had bought a regular saddle saying it was a gift for her brother, but did she ever have a chance to practice riding that way before running away? She seemed to ride awfully well, so I assume she did, but when? How?

Second, she mentions men who taught her to fence, but, again, I was left wondering how she convinced them to teach her? Who taught her and why?

Last, I wish the author had let us into Anna's head a little more about her desire to disguise herself as a boy. At times I felt like it was purely for the adventure and freedom that dressing as a boy would allow her. At other times, when she thought things like, "With the closing of that door I became a boy," I wondered if she really felt trapped in the wrong body, if inside she really was a boy.

Even though not a perfect book, I'd certainly be interested in reading a prequel that details her life before this adventure to get answers for some of my questions, and I'm interested to know what happens to Anna as she grows up if there are sequels. Heck, I'd love to read the love story of Johan and the queen too (so long as it ends happily)!

You have subscribed to Smashwords Alerts new release notifications for Camille LaGuire.

You have been added to Camille LaGuire's favorite list.

You can also sign-up to receive email notifications whenever Camille LaGuire releases a new book.