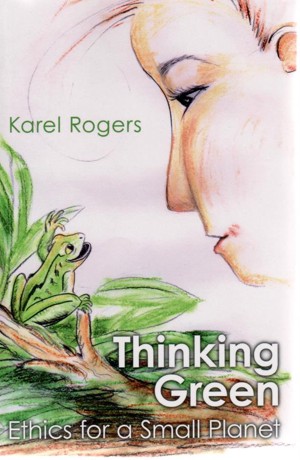 By Karel Rogers
Nothing short of an environmental manifesto for mankind, this extraordinary and learned treatise teaches a different way of thinking about humans’ place on the planet.

Activist and environmental researcher Karel Rogers earned her doctorate in from Michigan State University. She has held administrative and teaching positions at four colleges and universities. With over thirty years of experience in general biology, genetics, evolution, embryology, environmental science, ethics, and computer science, she is Emeritus Professor of Biology at Grand Valley State University and the author of a series of peer-reviewed scientific articles with topics ranging from paleoclimate reconstruction to factors causing the decline of modern amphibians. She is a past president of the board of directors of the West Michigan Environmental Action Council and a frequent guest speaker on topics like human population growth, energy, and global warming. She attended the 1992 Earth Summit in Rio de Janeiro, Brazil, and while her work often takes her to Canada and the Caribbean, she enjoys long sojourns in Madagascar and other remote areas.

You have subscribed to alerts for Karel Rogers.

You have been added to Karel Rogers's favorite list.

You can also sign-up to receive email notifications whenever Karel Rogers releases a new book.